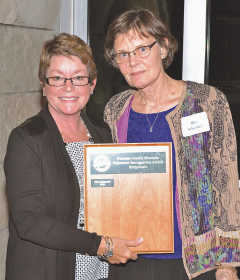 Schendel's service and dedication to the Putnam County Museum was applauded during the organization's 13th annual meeting Feb. 21 at the DePauw University Janet Prindle Institute for Ethics.

Schendel's involvement with the local museum has spanned more than a decade and includes laying out the 342-page book, "Peeler Pottery: A Retrospective," not to mention countless programs, flyers, note cards and other museum publications in addition to serving on the museum's board of directors.

The evening also included guest speaker Richard Walsh, a junior attending DePauw University, who spoke on the merits of volunteering and challenged those attending the annual meeting to think of new, innovative ways to serve as volunteers in their community.

Following the business portion of the meeting, Sherry Gammon was congratulated on her completion of two terms on the board of directors.

The evening concluded with the announcement of Kit Newkirk accepting the museum's offer to become its new executive director (as reported in the Banner Graphic last week).