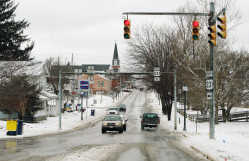 Although a little more snow did fall later, at mid-day Sunday, the intersection of Washington and Bloomington streets shows only about two inches had fallen, far less than the 8-12 inches forecasters had talked about earlier in the week.

A Winter Storm Warning remained in effect for Putnam County and most of central Indiana through 7 a.m. Monday, the National Weather Service said Sunday as March roared in like a lion in winter.

Although not near as severe as dire predictions of 8-12 inches of snow espoused earlier in the week, a frontal boundary stalling across southern Indiana was bringing snow, sleet and freezing rain off and on to various parts of central Indiana before departing with precipitation coming to an end overnight.

The Greencastle and Putnam County area had received an unofficial two inches of snow by 10 a.m. Sunday and experienced a lull in storm effects throughout the remainder of the daylight hours Sunday.

Along the Interstate 70 corridor, 4-6 inches of snow and sleet were still considered possible with locally higher amounts expected.

Over southern portions of central Indiana, 3-6 inches of snow and sleet were expected along with a quarter-inch of ice, again with locally higher amounts possible.

Residents of central Indiana were advised to be prepared for hazardous travel conditions lasting through mid-day Monday. Ice accumulation from freezing rain in the south could also cause power outages and other difficulties, weather officials reminded.

With meteorological winter ending on Friday (the last day of February), the central Indiana area set a record for snowfall during the winter months of December, January and February with a total of 52.2 inches. That topped the previous record of 51 inches, which fell from December 1981 to February 1982.

Overall, the snowy trend experienced during the first half of December, and especially throughout January, continued right into February. Last month was among one of the snowiest Februarys on record for much of central and northern Indiana.

Much of central Indiana received from 8 to 18 inches of snow. Indianapolis had 16.5 inches of snow, making it the ninth snowiest February on record.

Combined with the 26.9 inches that fell in January, it marked only the fourth occasion in recorded history in which two consecutive months experienced greater than 15 inches of snowfall in central Indiana.

Meanwhile, the Climate Prediction Center outlook for March indicates a greater chance of below normal temperatures across much of central Indiana.

At Indianapolis, the average temperature for the month is typically 42.2 degrees. The outlook also calls for an equal chance of above, below or near normal precipitation. The average precipitation for March at Indianapolis is 3.56 inches with 2.6 inches of snowfall.

The official Climate Prediction Center outlook for meteorological spring (March-May) indicates a better chance of near to slightly below normal temperatures across central Indiana. At Indianapolis, the average temperature for the spring season is 52.6 degrees.

The outlook also calls for a greater chance of above normal precipitation throughout the spring. The average spring season precipitation is 12.42 inches along with 2.8 inches of snowfall, most of which typically falls during the month of March.