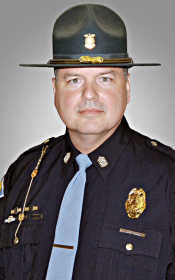 Indiana State Police First Sgt. Scott Stockton has announced his intention to seek the position of Putnam County sheriff on the Republican ballot in the May 6 primary election.

Stockton has been married to his wife, Dr. Jamie Stockton, for more than 28 years. Dr. Stockton is currently an associate professor in education studies at DePauw University.

"After a rewarding career with the State Police," Stockton said, "I am excited for the possibility to share and exchange my training, experience and policing education with my law enforcement peers in my home county.

"I truly believe the most successful police officers are those who serve their community with a servant's heart," he continued.

"The public grants an immeasurable amount of trust in an officer when they pin him or her with a badge -- that trust must be closely guarded and never broken. I strongly believe in the philosophy of 'To those whom much is given, much is expected,'" Stockton added.

Seven of his years with the State Police were spent patrolling the roads of Wayne County before Stockton was selected to be part of a dedicated team of troopers who formed the first highway interdiction efforts for the State Police. As a result of multiple successes, the team was honored with the Governor's Meritorious Service Award.

Stockton was later promoted to an undercover position with the Major Drug Section where he spent seven years investigating drug crimes. Stockton was assigned to the DEA (Drug Enforcement Administration) federal task force as well as the ATF (Alcohol, Tobacco, and Firearms) federal task force during his tenure at the drug section.

The sheriff candidate was promoted by ISP to the rank of sergeant, spending nine years investigating and supervising a statewide team of financial crime investigators.

The United States District Attorney's Office has twice recognized Stockton for his role in outstanding investigations. He was promoted to the rank of first sergeant and spent three years as a supervisor of special investigations.

Stockton was then promoted to commander of ISP undercover operations. He is currently assigned to the FBI (Federal Bureau of Investigation) as a task force agent with the violent crimes unit.