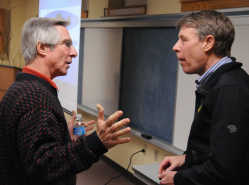 Bryan Brown (right) talks to Stu Fabe about his presentation "Delivering Brother Bruce: 100 days on the Colorado River." Brown showed photographs, told stories of his adventure and promoted ecological awareness at the free lecture Tuesday at the Putnam County Library.
Order this photo

Brown spoke of the historic journey Tuesday night at the Putnam County Public Library, in collaboration with DePauw University.

When Brown and his brother Bruce were on vacation at the Grand Canyon in the early '70s, they made a pact to return one day and recreate the journey that John Wesley Powell had made in 1869.

It was 41 years later that he set out to make that dream a reality, but he did so alone. His younger brother had passed away from muscular dystrophy in 2012, motivating Brown to begin planning his journey immediately. The expedition was done in tribute to his younger brother.

"I was planning at his funeral," Brown told the audience, highlighting the immediacy of his departure.

Brown did not accept sponsorship in any form because he wanted to promote both muscular dystrophy and his environmental agenda freely. His story included an array of dangerous rapids, painful bodily symptoms, biblical weather and the unbidden benevolence of nearly everybody he met.

At one point a well-outfitted group took pity on him and secretly stashed eight pounds of food into his kayak and then left before he had noticed. Among the hidden payload was a large bag of Brazil nuts, something that Brown is deathly allergic to, and because of his belief in "leave no trace" principles, leaving the food on shore was not an option so he carried it 120 miles before being able to relieve himself of the added weight.

At Lake Powell he came across a boat and soon realized that the best man from his wedding was onboard.

He referred to these incidents as "river magic."

Brown does corporate appearances based off his experience, but has adapted the story for free presentations to local communities in between the corporate dates as an attempt to raise awareness. He will make another 20 appearances by March 12.

The importance of watershed preservation, consolidation of wildlife habitats and wilderness areas, leave no trace practices and ecological responsibility were central points to Brown's presentation, as was the theme of inspiration.