Fresh off its third straight NCAC tournament championship where they routed Denison college at home, the DePauw women's basketball team is set to start its 11th straight NCAA Division III tournament bid against an unfamiliar opponent.

The Tigers will begin the tournament tonight defending their home court against the Claremont-Mudd-Scripps Athenas (24-3) who earned an automatic bid to the tourney after winning the Southern California Intercollegiate Athletic Conference Championship.

DePauw head coach Kris Huffman believes the CMS success is due to the high level of play that each of the Athena athletes is capable of. 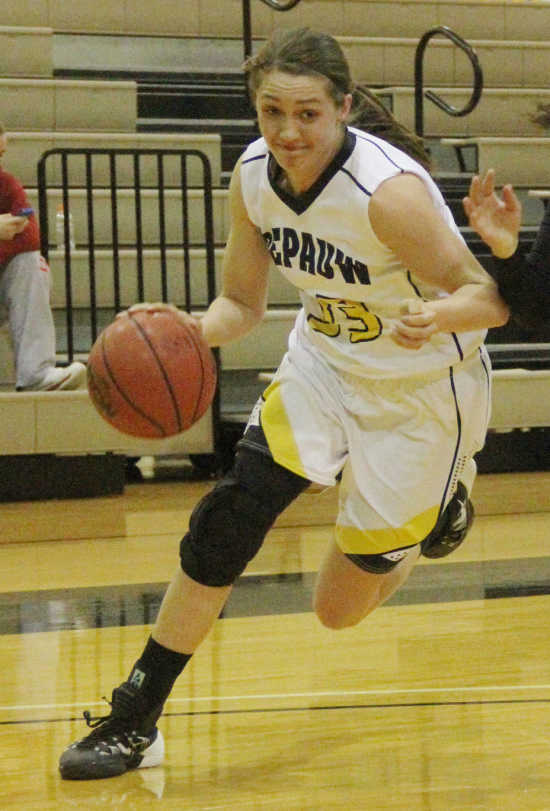 Senior Alison Stephens drives against the defense. Stephens was one of six DePauw players selected to the NCAC all-conference team. She led the Tigers in rebounding on the year with eight per game.
Order this photo

"They are extremely athletic," Huffman said. "They can spread the floor, and they can change up their defense. So they are hard to defend and hard to score against. They are an outstanding team."

The DePauw Tigers are an outstanding team in their own respect. In the last two years the women have only lost one game and they enter the 2014 NCAA tournament as the defending champions.

While the season is unique in that respect, Huffman says it is important to try to conduct business as usual.

"It's special to be playing in March. Only 64 teams make it this far," Huffman said. "I try to tell them that, but for our preparation we try to prepare like we have all season long."

Throughout the season, DePauw has prepared and played very well. They finished their season with a 27-1 record, losing to Ohio Wesleyan in a 65-64 nail biter. Junior guard Savannah Trees leads the Tigers with 14.1 points per game, while Senior forward Alison Stephens leads the unit with 8.8 rebounds

They bested Denison College in the NCAC championship game on Saturday 69-41. Only four of DePauw's 27 wins were closer than 10 points and despite the loss to Ohio Wesleyan, the Tigers are nationally ranked the third best team going into the postseason.

"We had great attention to detail on the scouting report in the game against Denison," said Huffman. "We needed to be able to make adjustments on the fly."

Huffman says it'll be the same diligence and focus that it took to win the NCAC to come out on top in the NCAA.

"We will try to be as much like us as we can," Huffman said. "We need to make sure we have offensive flow. We have to do great work on defense and then we have to do our work on the boards."

If the season didn't end on a high enough note, the NCAC named six DePauw players to the all-conference team.

"I'm happy to see that they got some recognition," said Huffman. "When you rotate players, they sometimes they don't get those types of numbers. So to see them with recognition is nice."