Barbara, the oldest of five children, was born Oct. 11, 1919, in Martin County, Ind., to Walter and Pansy Terrell. 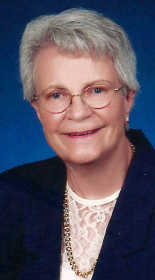 They lived most of their married life in Fillmore, and enjoyed many winters in Winter Haven, Fla., during their retirement years.

She is survived by her daughter, Bonnie (Ernie) Hopkins of Crawfordsville; son James A. Craig (Vividana) of Athens, Ala.; grandchildren Kristen (Christopher) Ervin and Darren Chadd, both of Crawfordsville; sisters Betty Quackenbush, Bedford, and Josephine Freeman, Ocean Springs, Miss.

In addition to her parents and husband, brothers John Terrell and Walter H. Terrell also preceded her in death.

Barbara was a graduate of Fayetteville, Ind., High School in 1937 and Central Beauty College in 1962 and for several years had the BC Beauty Salon in her home.

She had also worked at First Citizens Bank and Farm Credit Association in Greencastle. Barbara was a member of First Baptist Church in Crawfordsville, attending faithfully until she left her home to live in an assisted living facility in 2009.

Friends may call at Powers and Priebe Funeral Home from 9-11 a.m. Saturday, March 15 with services at 11 a.m. with Pastor Isaac Zull officiating.

Interment will be at Fillmore Cemetery at 3 p.m. Saturday.

Online condolences may be sent to powerspriebefh.com.