Badgley appeals sentence in stabbing death of his father

Less than a week after being sentenced for the stabbing death of his father, a 22-year-old Greencastle man is appealing his 40-year sentence.

In a handwritten document submitted to Putnam Superior Court on three-ring notebook paper, Thomas W. Badgley requested the appeal and the appointment of a public defender to undertake the appellate process.

"I'm asking to appeal my sentence that I received on March 7, 2014," he continued. "I cannot afford an attorney, and I'm asking if you could please appoint me a public defender. Thank you for taking your time to read my letter, it's gladly appreciated."

Badgley really has little to lose in seeking the appeal since he will be using a court-appointed public defender and will remain incarcerated during the sentencing appeal. 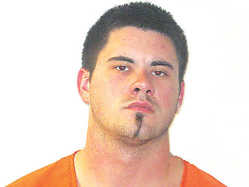 Badgley, who agreed to a plea-bargained charge of voluntary manslaughter in the Sept. 12, 2012 fatal stabbing of his father, Tommie Dale Badgley, 53, was sentenced at the conclusion of an emotional court hearing last Friday afternoon.

After more than two hours of testimony from state and defense witnesses attempting to influence his decision in a sentencing range covering 20-50 years, Judge Denny Bridges ordered a 40-year sentence in the Department of Correction (DOC).

Badgley is scheduled to serve out a 35-year commitment.

"I believe a fair sentence would be 40 years in the DOC with 35 executed and five years suspended," Judge Bridges ordered.

With the appeal process now set in motion, the next step will be to prepare a transcript of the sentencing hearing and a record of proceedings to pass along to the Indiana Court of Appeals, Putnam County Prosecutor Timothy Bookwalter told the Banner Graphic Thursday.

The Indiana Attorney General's Office will represent the state (i.e., prosecution) during the appeal, Bookwalter said.

Local attorney Joel Weineke has been appointed as Badgley's new public defender for the appeals process. He succeeds public defender Dennis L. Thomas Jr. of Indianapolis, who represented Badgley during Putnam Superior Court proceedings but does not do appellate work.

The appeal should be a "quick process," Bookwalter said.

"It should all be done in six months most likely," he said.

The appeals court essentially has four ways it could go:

-- It could say the trial court got the sentencing right and let the ruling stand.

-- It could say the trial court gave Badgley too much time and order a resentencing hearing.

-- It could disagree with the trial court and set sentencing of its own.

-- Or it could, however unlikely, decide the sentence was too light and order a longer sentence.

Regardless, Badgley has been given 541 days of credit time for the 18 months he has been incarcerated at the Putnam County Jail.

"This wasn't any accident," Bookwalter said during final arguments. "It was an intentional crime."

"I don't think anybody thinks this young man is a murderer," Thomas said, knowing that a plea agreement dropped the initial murder charge in return for Badgley's guilty plea to voluntary manslaughter.

Bookwalter also pointed out that Badgley received "a significant break" in not facing a murder charge, which carries a sentencing range of 45-65 years.

Thomas suggested his client was entitled to "some real consideration" for the minimum 20-year sentence because he is a changed person since the incident and his 18 months in jail.

Judge Bridges, however, weighed the aggravating and mitigating circumstances differently.

He noted Badgley's young age (22), his lack of serious criminal history and the fact he did accept responsibility and plead guilty as mitigating factors all in his favor.

Aggravating factors, however, outweighed those, the judge said.

Bridges pointed to such factors as the victim being unarmed, the idea the father was trying to save his son's life, and the fact the son could have let cooler heads prevail and walked out the kitchen door instead of grabbing a nine-inch steak knife from the drawer.

Finally, Judge Bridges added, last Friday was "the first time I have ever heard him say 'I'm sorry.' It's convenient to say 'I'm sorry' when you're about to go to prison."

With the original sentence pronounced by Bridges, Badgley would be closing in on age 40 by the time he is due for release (figuring the typical two days counted for one day served "good time" credit) as it stands presently.