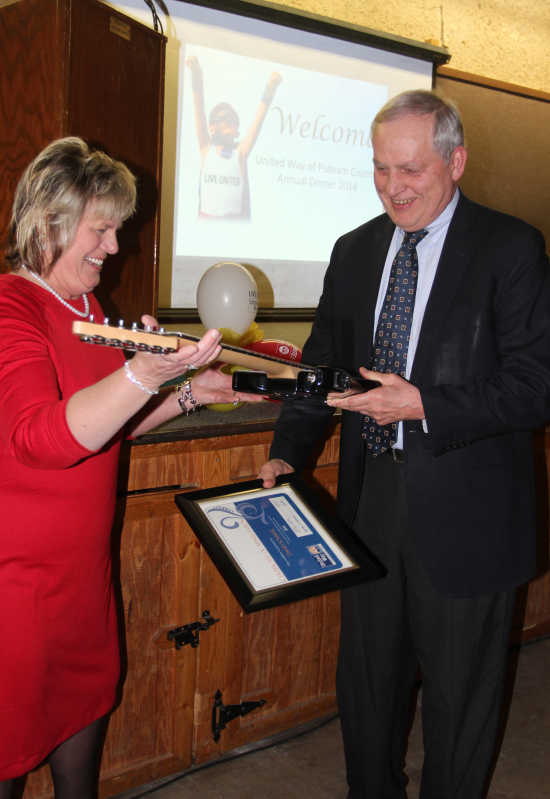 Newly appointed United Way President Cathy Tipton presents former president Dave Bohmer with an award and an electric guitar signed by all board members as a thank you for his 11 years of service during the organization's annual dinner Wednesday evening.

Putnam County community members gathered to support United Way's current campaign "Be an Everyday Hero," which unfortunately has not met its $185,000 goal.

"Ending my second year here with the United Way, I really have something to compare the current campaign to," Executive Director Jennifer Edwards said. "Last year I stood here and I'm not going to lie, I was disappointed, we hadn't met the goal and I took it personally. I felt like I had failed the community because I hadn't raised the funds that we had set out to do. This year, no we haven't met our goal yet. I told you that we weren't done then and we aren't done now."

"This year, yes we are in a much better place than we were last year," Edwards said. "But again, we are just short of our goal and again we are not done yet. There is so much left to do, but we have the mindset as an organization and the endurance to finish this long race that we started."

Edwards also illustrated the fact that the residents of Putnam County may not wear capes or a fancy suit on a daily basis, but that does not mean that they can't be heroes to someone, recognizing a seven-year-old boy who donated his $13 allowance this summer that went on to provide one student with school supplies.

"All too often I think that we forget that even the littlest gestures can make the biggest difference," Edwards noted. "We have made some great improvements within our organization and we continue to strive to find ways to serve our community better. We have implemented new events to help with community awareness while also establishing our presence here in the community. We desire to continue the work we have started, but we cannot do it without you. We need our heroes."

With the money raised from the silent auction, it brought the campaign's total to 87 percent, or nearly $160,000, with 4 percent raised on Wednesday evening.

Edwards also took time during the evening to honor three members who will be leaving the United Way Board of Directors, Isaac Case, Murray Pride and Dave Bohmer.

Case, is finishing his third year with the United Way of Putnam County, while Pride is retiring after nine combined years over two different spans of time at the United Way.

"Murray, your service to our community is really astounding," Edwards said. "I can say I'm a better person having known you in the last two years. You have given me something to really strive for. Your knowledge and commitment has moved me to learn, to grow and simply to do more here in Putnam County."

Pride, the former superintendent of both North Putnam and Eminence school corporations, has served on various committees and also had the role of president of the United Way during his time here. He's also served as past president of the Greencastle Rotary Club, Putnam County Community Foundation and St. Paul's Parish Council.

Finally, Edwards ended by thanking retiring board president Bohmer, who will soon be moving to Chicago to be closer to his children and grandchildren.

Bohmer has been with the United Way for 11 years, five of which he has been president. He also served nearly 15 years with the Economic Development Commission along with being on the Democratic Central Committee, House Corporation of the Delta Epsilon Fraternity, Greencastle Rotary Club as well as serving on the Indiana Advisory Council on Intergovernmental Relations.

"Dave, thank you for your longtime and widespread service here in Putnam County," Edwards said. "This community will have a major void to fill with both you and Lynn leaving here to retreat to Chicago. I cannot thank you enough. We will miss you."

Although Bohmer may be leaving Putnam County in the near future, he noted that if the community were to meet its campaign goal, he will come back and wear a Superman costume as promised.

"I know the United Way has the capability of accomplishing much more than what we've been able to do and it's not for lack of trying," Bohmer said. "One of the biggest potentials we have here is a lot of large employers, but not many that participate in a fashion that allows employees to do campaigns and do payroll deductions. That's a place if we could tap into that we could have substantially more success. There's a lot of need in Putnam County. The potential is there."

Taking the place of Case, Pride and Bohmer on the board are Shane Johnson, Brooke Trissel and Heather Taylor. Cathy Tipton will be taking the role of president with Lisa Clark as vice president, Andy Wright as secretary and Kerry Ames as treasurer.