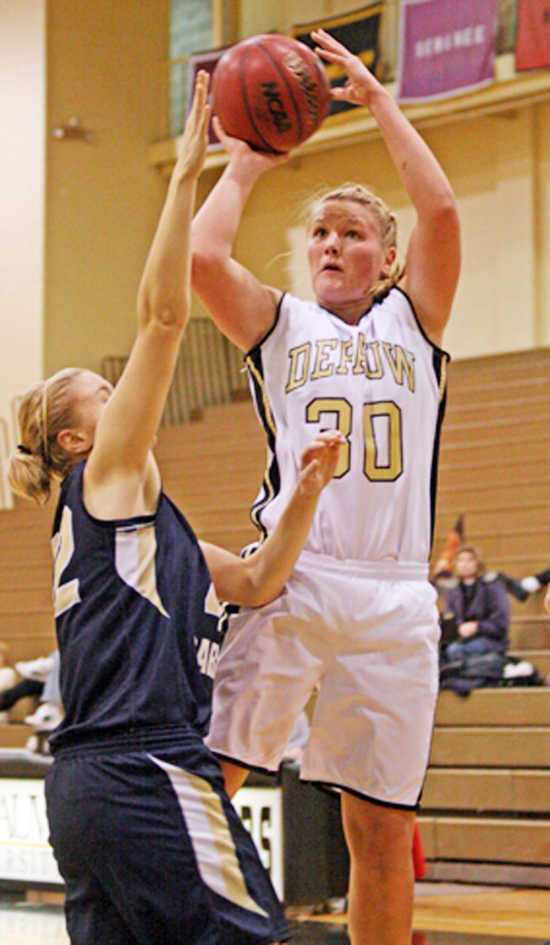 Alex Gasaway is a senior at DePauw University. She was born on Oct. 29, 1991 to Clint and Jean Gasaway. She has an older sister, Annalise Gasaway and is majoring in communications.

Gasaway played on the championship wining Tigers last year. She injured her knee with a torn ACL but was still able to finish the season.

Banner Graphic: What were your team and individual goals this year?

Alex Gasaway: For an individual goal coming off of surgery, just to try and get back to where I was before the injury.

For the team we wanted to come out with two conference titles. More importanty we wanted to get into the national tournament. Our main goal is to make a run at the championship. We felt like it was a realistic goal and Coach Huffman has us prepared well.

BG: Are you involved with any clubs or organizations at school?

AG: I'm on the board of directors of D3TV, the television program here at DePauw. I'm the Director of Programing.

BG: Who has had the biggest influence on you?

AG: My parents have had a huge impact on who I am as a person and an athlete. They had a hands off approach and allowed me to grow into the player and person I want to be. I really admire them as people.

BG: What lessons can be learned from sports?

AG: Athletics can teach a healthy drive. You already have to have that but sports can develop that. It's been the same way with me. It can teach teamwork and also develops your leadership role. It forced me to come out of my shell and be a more vocal leader. Also commitment because I could be doing anything besides playing basketball but you really have to commit to the practices and working out.

BG: What has been your best memory at DePauw?

AG: That has got to be the national championship last year. It's kind of an unbeatable memory, right? It's an indescribable feeling. It's kind of sad because unless we win it again this year we'll never experience anything like that again.

BG: What are your plans after graduating?