The DePauw women's basketball team will welcome three schools from two different conferences to take part in the NCAA sectional round. The victor will earn a trip to the Division III final four.

The first match-up will begin at 5 p.m. Friday as Wisconsin Intercollegiate Athletic Conference rivals No. 12 Wisconsin-Oshkosh (26-3) and No. 13 Wisconsin-Whitewater (24-4) meet in what will be their third match-up of the year.

No. 3 DePauw (29-1) will do battle with the No. 9 Carthage College Lady Reds (26-3) starting at 7:30 p.m. Though the sectional features three Wisconsin area schools, the Tigers are lucky enough to be hosting for a second straight weekend. 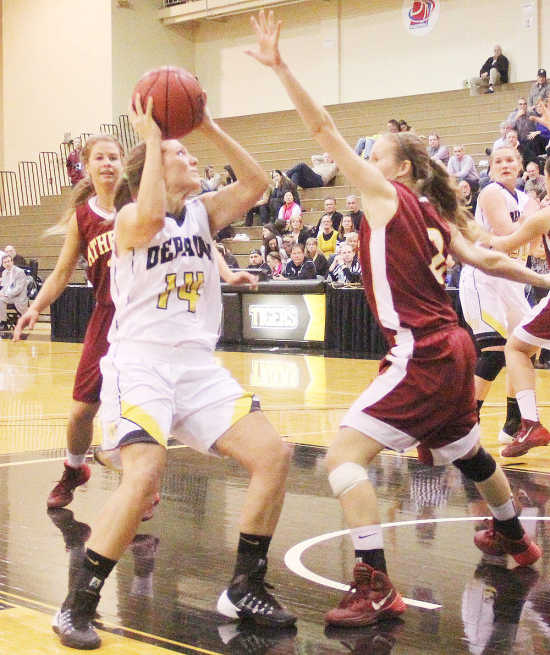 "It's nice to play at home," coach Kris Huffman said. "Players can stay in their normal routines. It does mean they're still taking exams and going to classes, but we are excited to be playing at the Lilly Center."

The Wisconsin-Whitewater Warhawks were the runners-up in the 2013 NCAA tournament, losing to DePauw 69-51 in the championship game. Senior Mary Merg leads the Warhawks in scoring with 19 points per game.

Carthage College last played DePauw on March 3, 2012 in the second round of the NCAA Division III Women's Basketball Championship, where the Tigers lost 53-48. The Lady Reds lead all Division III schools in field goal percentage shooting .500.

"This is an outstanding group of teams," Huffan said. "Carthage plays similar to a team we lost to a couple of years ago. They have tremendous post play and are a great defensive team. They can score from anywhere on the court."

The winners of Friday's games will play Saturday at 7 p.m and while players and fans might have their minds on the entire weekend, coach Huffman says perspective is key.

"It's important to only think about one game at a time," Huffman said. "That's all you are garaunteed. (The NCAA Tournament) is a different type of pressure because you don't get another game to play if you lose."

DePauw played through Claremont-M-S and Transylvania last weekend in the first and second round beating the Athenas, 79-68, and the Pioneers, 76-68.

Both teams came out with a full-court press after half-time and each time the Tigers struggled.

Huffman described each of the wins as 'tough'.

"We could see (the press) at any time," Huffman said. "We just talked over our game plan again. We got a little tight toward the end of the game but we'll be able to handle it if we see it again."