DePauw pulls away from Carthage to advance 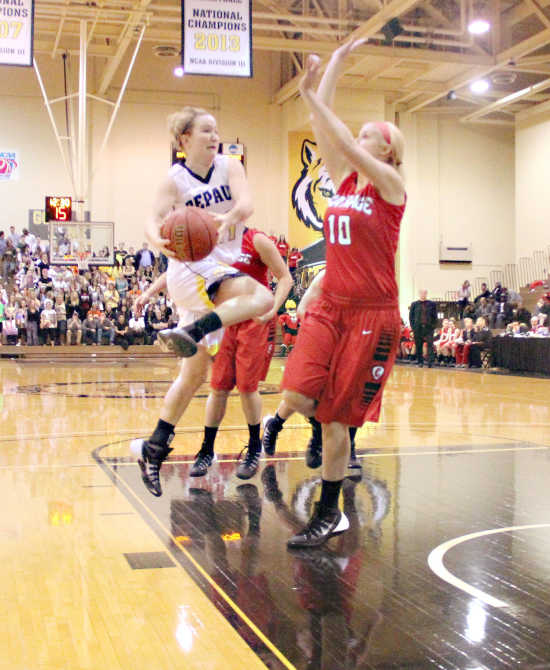 Led by 20 points from Savannah Trees (above), DePauw erased an early deficit to dispatch Carthage from the NCAA Tournament Friday night, 73-54. The Tigers had key contributions from a number of areas, including a team-high 13 rebounds and eight points from Alison Stephens (above right) and six points off the bench from Lauren Abendroth (right). (Banner Graphic/JAY LOCKETT)

A slow start couldn't dampen the DePauw women's basketball team's title hopes. They are now one win away from reaching the final four in the Division III NCAA championship tournament.

DePauw squared off against the Carthage Lady Reds (26-4) Friday at the Lilly Center coming away with a 73-54 win.

The last time Carthage visited DePauw University the Lady Reds knocked DePauw out of the 2012 NCAA tournament, a piece of history that was not forgotten by DePauw players.

"We've talked a lot about Carthage," senior forward Alex Gasaway. "That's something you think about. It stays in your mind. So it's a taste for revenge but we still prepare like it's just the next game."

If anyone from Carthage wasn't tuned into history, DePauw staff made sure that the second round game from two years ago was on everybody's mind.

"We've been practicing here in the (Lilly Center) gym and the whole time the scoreboard said 0-5," said Carthage coach Tim Bernero. "I'm smart enough to know, and I think (Carthage players) are too and we knew that to be the points we beat them by two years ago. So we knew they had that mentality."

The Tigers' mental focus also was on defense as they were facing for the second straight game a conference player of the year in Carthage junior Stephanie Kuzmanic.

"She's amazing," DePauw coach Kris Huffman said. "We didn't know if we could slow her down coming in and she has the ball all the time. We tried to make sure we always knew where she was."

DePauw was able to handle the threat nicely as it held Kuzmanic to just four points shooting 2-of-11 from the field.

However the win wasn't without its woes. The DePauw women came out shooting just 2-for-7 and found themselves down seven early.

"There's always some jitters," senior forward Alison Stevens said. "It's a lot of people. It's a lot of pressure. You get a little excited but you nerves calm down as the game goes on. We knew that and we were able to stay poised." 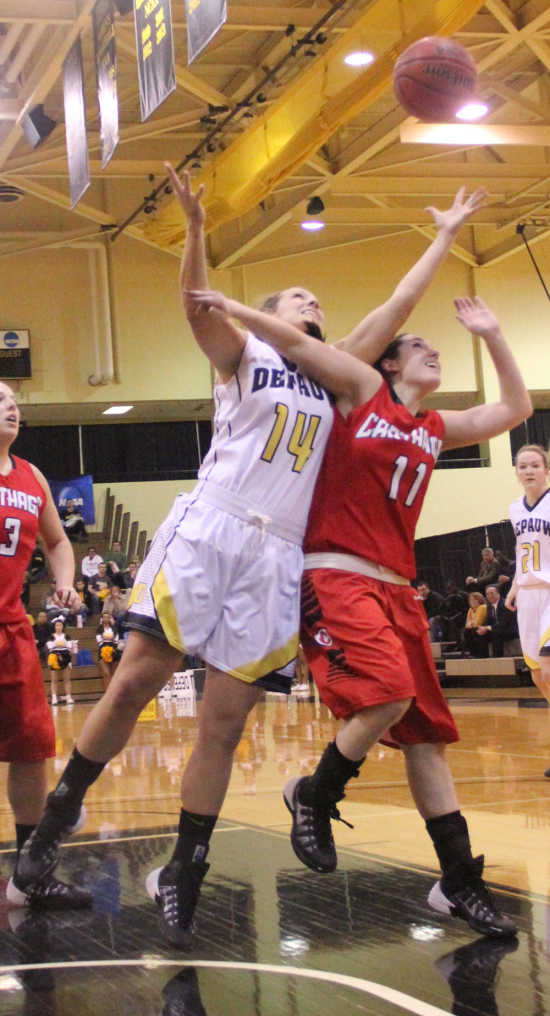 Stephens grabbed a game-high 13 rebounds, seven coming in the first half. Another big contributor in the first was Gasaway, who scored 11 of her 18 points in the first. The effort helped the Tigers climb back into the contest, tying the game at 24 with four minutes left.

While they were able to stifle the scoring of Kuzmanic, she was able to orchestrate the offense finishing with nine assists.

"They did a good job bothering her in the full court," said Bernero. "There were times to attack and she didn't. (DePauw's) defense was pretty good on the penetration stuff and that's what she is good at, but she had a bunch of assists. I thought we had a good game inside."

DePauw took a nine-point lead into halftime and came out of the locker room in attack mode. Junior Savannah Trees led the way in the second half with 14 points on 6-of-8 shooting after scoring just six the first. However the scoring of Carthage junior Kristi Schmidt kept it close going into the timeout.

That was when Savannah took over scoring any which way was available. She knocked down two jumpers after the 30-second time-out. She later answered a Kuzmanic jumper with a drive into the paint where she was able to draw a foul and knock down her free throws. She then scored again on a layup making the score 50-35 at the 12-minute mark. Carthage never drew close again.

"I was just trying to be more aggressive overall," Trees said. "I wasn't being as aggressive in the last couple games."

In the past two games against CMS and again against Transylvania, DePauw has seen the opponent switch to a full-court press after halftime. The Lady Reds didn't believe they would be able to make a run at the lead if they just kept it close.

"We hit a bump in the first half," Bernero said. "After halftime they started hitting shots. It was like the snowball kept rolling. We didn't have a handle on the game after those first five minutes."

With the win, DePauw will play their last home game of the season against No. 13 Wisconsin-Whitewater (25-4) who beat No. 12 Wisconsin-Oshkosh Friday and who also lost to DePauw in last years' NCAA Division III Championship game. The winner of this will advance to the Final Four to be played in Stevens Point, Wisconsin.

"You work really hard everyday for this," Stephens said. "To move on and go the Final Four and the finals."

Before they punch their tickets, the Tigers are glad to be playing in front of a friendly crowd where they can follow their own schedules.

"It's very nice," said Trees. "I'm superstitious, so it's nice to be able to do the same routines."

Huffman believes what gives this team the edge going deeper into the postseason is the bond that the players share on the court and their commitment to each other off the court.

"What I love about this team is they don't want to quit playing," Huffman said. A lot of teams this late in the season have players that are tired pf playing together, but they love each other and they all have a passion of the team and the game. 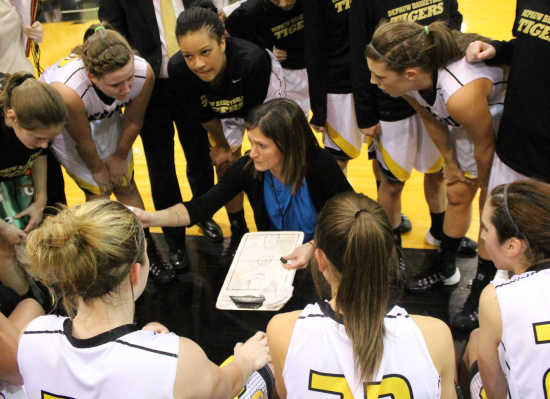 With the Tigers building a lead late in the first half, Coach Kris Huffman sets up the ensuing play during a timeout. (Banner Graphic/ JARED JERNAGAN)
Comments
View 1 comment
Note: The nature of the Internet makes it impractical for our staff to review every comment. Please note that those who post comments on this website may do so using a screen name, which may or may not reflect a website user's actual name. Readers should be careful not to assign comments to real people who may have names similar to screen names. Refrain from obscenity in your comments, and to keep discussions civil, don't say anything in a way your grandmother would be ashamed to read.
Respond to this story