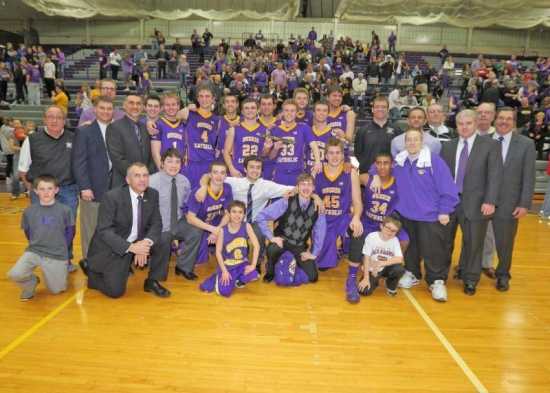 Class 3A No. 2 Guerin Catholic punched its ticket to the Richmond semi-state Saturday night after outscoring Edgewood 31-12 in the second half en route to a 64-33 win.

Much of the title game was dictated by Guerin Catholic's size mismatch all over the court. A front line featuring three 6-foot-6-inch players in turn led to a staggering 34-10 rebounding advantage.

That came in handy after Golden Eagle senior guard Whit Rapp missed the second half after falling hard late in the first quarter.

Guerin Catholic scored the opening seven points of the contest and could have been out of sight by the end of the first quarter had Edgewood senior Clayton Settle not buried three 3-pointers, one of which was a part of a 4-point play.

Instead, the Mustangs trailed 18-12 after the first and cut the gap to five after a pair of Settle buckets with 4:23 until halftime. 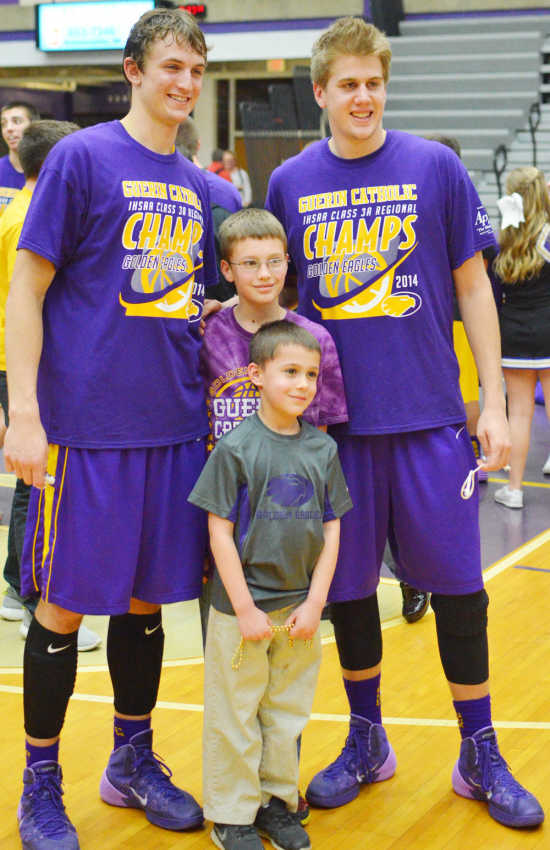 The Golden Eagles responded with 10 straight points, with five coming from center Cris Burrough, to ensure a double-digit halftime lead of 33-21.

Edgewood briefly cut the lead to 10 on a Ryan Newman three but the lead never reached single digits, with the squad shooting 2-of-12 in the frame.

Instead, the Golden Eagles went on a 13-0 run between the third and fourth quarters to end any real chance of a comeback.

The final few minutes became a procession of free throws.

Some of the largest roars from the Guerin Catholic fan sections were reserved for Stuart Shultz and Brian Matthews II after each scored from the line.

The loudest, however, came as time expired and the Golden Eagles claimed their second regional title in three years.

Burrough and Matt Holba each recorded double-doubles for Guerin Catholic with lines of 12-10 and 11-11, respectively.

Aaron Brennan led the squad with 14 points, while Godfrey scored 12 off of the bench.

Settle led all scorers with 16 points for Edgewood. Newman was the only other player to score more than a single basket for the Mustangs and finished with six points.

Guerin Catholic will next play No. 1 Greensburg (26-1) in the Richmond semi-state next Saturday.