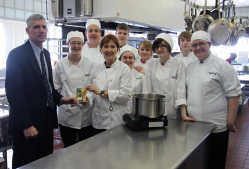 With a reputation of putting her students first, Area 30 Career Center instructor Mary Anne Birt has earned the February Teacher of the Month award.

Nominated by one of her current students, Alyssa Bolin, Birt was particularly touched to receive such an award because it came from someone she has inspired.

"Mrs. Mary Anne Birt is an amazing culinary arts teacher. I have never met anyone like her," Bolin said in her nomination. "Mrs. Birt always believes in her students and helps them when they are down. I am so very proud to have her as a teacher and as someone to look up to as well. She actually cares for her students. She is an excellent role model and teacher."

With her family, friends and students soliciting votes through Facebook, Birt also learned that she had won through the social media site.

"My daughter had sent out of Facebook message asking people to vote for her momma and that's how I found out (I was nominated)," Birt said smiling. "I was just really happy to see that (I had won)."

Birt has been teaching culinary arts at Area 30 for nearly 12 years. Prior to teaching at Area 30, Birt had taught family and consumer sciences at Danville Middle School as well as Warren Central High School in Indianapolis.

"I've been teaching culinary arts here for about 12 years and I love it. It's the best place to work," Birt noted. "It's the best job ever. On any given day, any teacher in here could be the Teacher of the Month. There's some really good stuff going on here at Area 30 and I'm just really honored."

Birt currently lives in Greencastle with her husband of more than 30 years, Ron. She has two children, Leslie Fordice and Daniel Birt, as well as two grandkids, Hallie and Jackson.

As part of her award, Birt received a $50 gift card from Banner Graphic General Manager Daryl Taylor. The teacher said she has not yet determined what she will do with the gift card, but will likely give it to the student who nominated her.

"She took the leadership to do that (to nominate me)," Birt said. "Or I'll spend it on my class. One of the two things."

Nominations for the March Teacher of the Month will be accepted through Wednesday, March 19. Voting will be conducting between March 24 and March 29.