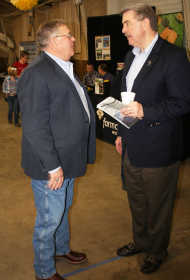 While the new director of the Indiana Department of Agriculture says he has seen Hoosiers in different facets of agriculture turning against each other, Putnam County stands as an example of doing things the right way.

That was the assessment of Ted McKinney, keynote speaker for the annual Ag Day Breakfast Saturday morning at the Community Building on the Putnam County Fairgrounds.

"I expect Putnam County to lead the way in this whole revival of agriculture," he told the breakfast audience.

"It's very troubling," McKinney said, "but I'm starting to see people in agriculture turning against each other, even in some rural, agrarian areas of our state."

But that does not seem to be the case in Putnam County, he said, offering kudos to all the local agriculture sectors who join together annual for the Ag Day celebration.

"My compliments to all of you in Putnam County," he said. "You've brought it all together here, agri-business and ag production, even local elected officials."

That doesn't always happen McKinney suggested, noting that it also served as a good reminder that "a little bit of economic development is going on here, too."

The Indiana director of agriculture said he celebrates organic farming and the latest in barn technologies, while embracing the tried-and-true roots of farming and the farm economy.

What he doesn't celebrate, McKinney said, are misinformation campaigns and/or the denigration any facet of agriculture.

"Yes, I'm from the government," he smiled, offering a variation on an old theme, "and I'm here to try to help you ..."

Saying he now lives in "suburbia, where you don't get scenes like this," McKinney pointed to the winning photos on the front page of the Banner Graphic Ag Day supplement.

"That takes me back," he continued, recalling how he was told if you listen carefully you could actually hear the corn growing out in the Indiana countryside.

"I don't really know if I did hear the corn growing or not," McKinney said, "but I remember the experience."

And it stuck with him as he made his final point Saturday.

"Let's not forget our roots," the state ag director said. "Let's celebrate them, and for crying out loud, let's step up and continue to support agriculture and keep reaching out to those who don't know or understand agriculture."

In addition to McKinney's remarks, the Ag Day breakfast also featured the annual announcement of the Hall of Fame awards.

Allen Royer, district forester, was named the winner of the 25th Putnam County Friend of the Farmer award.

"He's been so good working with farmers, so good with kids and has touched so many local lives," Darrel Thomas said in introducing Royer, who also operates Wagoner's Christmas tree farm.

The Gottschalks have been active in the livestock industry at the county, state and national levels, Thomas said, while demonstrating a "keen interest in helping kids learn livestock production."

"It's certainly an honor and a privilege," Larry Gottschalk responded, "to be able to stand here and accept this award."

In other news, breakfast program emcee Ken Carrington announced that the Ag Breakfast Committee is making a $1,000 donation to the ongoing project putting a new furnace in the Community Building. He called Fair Board President Steve Greeson to the stage to make that announcement.