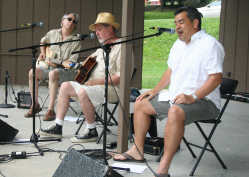 The ParkFest summer concert series brings local acts such as the Mongrel Dogs, featuring (from left) Istvan Csicseray-Ronay, Ron Dye and Alex Puga, to the bandshell at Robe-Ann Park. The Greencastle Civic League is looking for sponsors for the 2014 series.

In 1984, the Greencastle Civic League Inc., a nonprofit organization, was founded with a mission to promote beautification, clean-up, cultural development, and general improvement of life in Greencastle.

For the past 20 years, the Civic League has sponsored the ParkFest summer music series in order to promote the arts, support local musicians and give back to the community in the form of free, high-quality, family-friendly entertainment.

In 2012, the Civic League significantly revitalized the program and was able to feature twice the number of bands and offer food onsite from local restaurants.

In response to the changes, average attendance grew from 30-40 people each concert to 250-300 people. ParkFest is now a major attraction in Greencastle.

Civic League strives to continue to grow and improve this concert series, and is seeking community help to do so. The league is asking local individuals and businesses to consider becoming ParkFest sponsors.

For a list the musicians who are interested in performing this year, persons may email LaToshia Everson at teverson123@yahoo.com. Sponsors may choose which bands/ performers they would like to support with their donations or make a general contribution toward the cost of the sound system rental and operation.

This generosity will assist in supporting local musicians and in providing a summer full of free entertainment for the entire Greencastle community.

In exchange for the sponsorship, names or company logos will be featured on all ParkFest promotional materials and mentioned from the ParkFest stage. Those who choose a specific performer or band will be mentioned in the weekly press release for that concert.

In order to continue to plan on schedule, selections should be emailed by Saturday, April 5.

The Civic League would like to thank the community for being partners as it continues to grow and improve the ParkFest summer music series.