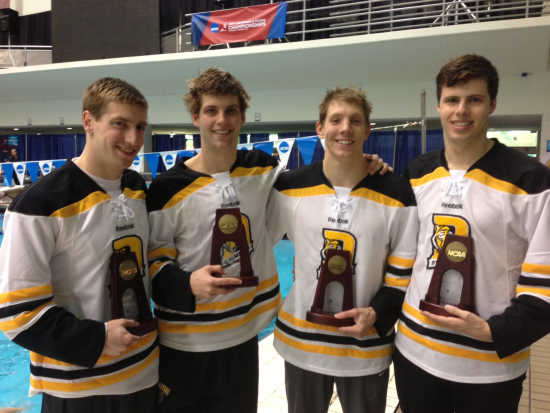 The 400-yard frestyle team of (from left) Sophomore Alex Grissom, junior Matt Haeske, junior Casey Hooker, and Sophomore stephen McMurty placed fifth in hte prelims but finished with 2:59.78 which put them in fourth place. That time broke the DePauw record which was set in last year's championships. (courtesy photo)

Casey Hooker, Blake Lehmann, Alex Alfonso and Alex Grissom were fifth in the prelims in 3:01.18, but finished under the three-minute mark and in fourth place in 2:59.78. That mark broke the DePauw record of 3:00.41 set at last year's championships. 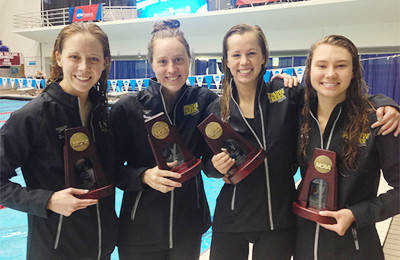 DePauw Women's 400-yard relay team of (from left) Emily Weber, Angel Newton, Caroline Brieges and Kristen Olson broke the school record twice Saturday, finishing with a time 3:27.42 in the final round. Olsen also broke her own school record in the 200-backstroke finishing 18th with a time of 2:03.15 (courtesy photo)

The Tigers totaled 100 points and finished 15th marking the sixth time seven years DePauw has finished in the top 20.

Caroline Bridges, Emily Weber, Kristen Olson and Erin Horne were 11th after finishing the prelims in 3:27.89 to break the record of 3:28.50 set at last year's Championships. In the finals, the four finished in 3:27.42.

During the prelims, Bridges tied for the 16th and final spot for the consolation finals in 51.77 seconds, but lost the swimoff with Kenyon's Jenner McLeod by .12 seconds after finishing in 51.68.

The 15th-place finish was DePauw's best since the Tigers were ninth in 2008.