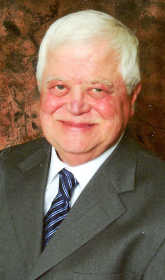 Ronnie was raised by his grandparents, Mr. and Mrs. Carl V. Skelton in Madison Township, Putnam County, and attended Clinton Center School, grades 1-8. He graduated with the class of 1960 at Bainbridge High School.

He began working at the Greencastle IBM Corp. plant in 1961 and retired in 1987.

Ronnie married Sandra Pickett in 1961, and she survives.

He has one son, Carl V. (CV) Skelton; a daughter-in-law, Debbie; and two grandchildren, Lindsey and Lauren Skelton.

Ronnie was an avid sportsman. He coached Greencastle Little League for 13 years and was selected to the Putnam County Bowlers Association Hall of Fame.

After retiring from IBM and moving to Rockville, he started and operated Rockville Feed Center for 22 years during which time he was a Rockville Community School Board member.

Visitation will be 4-8 p.m. Tuesday, March 25 at the funeral home and Wednesday from 8 a.m. until the time of service.