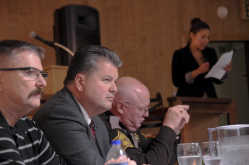 ROACHDALE --For the Putnam County residents who weren't packed into the North Meeting House in Roachdale on Thursday night, "Meet the Candidates" was a success on all accounts.

Kerns was one of an estimated 130 in attendance at the event in which those who didn't arrive early enough to find a seat on the various sofas, folding chairs, or tables were left to stand at the rear of the hall.

The crowd listened as all three sheriff's candidates -- incumbent Steve Fenwick, Craig Sibbitt and Scott Stockton -- and all three District 2 commissioner hopefuls -- incumbent Max Watts, John Huber and Rick Woodall -- spoke of their ties to Putnam County, the platform of their campaign and answered questions from the community.

Among the challenging candidates for sheriff, Sibbitt and Stockton, a reform of processes within the sheriff's department was the crux of many points made for their candidacies.

"I was a citizen for a long time before I was a deputy. I was a farmer making $100,000 decisions monthly. I was a jailer; I know every aspect of the jail. I was a SWAT member..." he explained, "I haven't sat behind a desk the last 11 years I've been out there doing it."

Sibbitt was honest about his frustration with the sheriff's department. "Frankly I am embarrassed about the last two administrations. They've let this community down," Sibbitt said.

"The biggest problem we have right now is getting your trust and your respect," Sibbitt added to his opening statement.

Stockton, a first sargeant in the Indiana State Police, spoke of reforming processes in the department but was less direct about calling out specific administrations or individuals.

"It is not broken, it can be fixed. It's unfortunate, these things happen sometimes when corrective action isn't taken..." Stockton said of the issues within the sheriff's department. 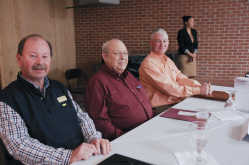 Stockton explained that a financial audit of the department, setting up a call and complaint procedure with copious amounts of documentation on all allegations and assessing the current hiring process at the department would be his paramount reforms if elected to office.

Incumbent Steve Fenwick highlighted the successes and improvements that he's made to the department, and was confident that he could continue those efforts.

"(My) first five years I've increased the amount of road deputies from 14 to 21. And by the end of this summer we'll have hired two more merit officers and these will be for the animal control," Fenwick explained.

He spoke of his increasing the number of road deputies as essential to providing greater coverage of Putnam County.

"...that allows us to have an officer north and south and central most of the time," Fenwick said.

District 2 commissioner hopeful John Huber referenced his "construction knowledge, bridge work and road construction, sanitary service, storm service...," and other experiences managin small businesses as the source of insight and knowledge required to be successful in the role if elected.

Incumbent Max L. Watts spoke of being a retired Lieutenant Colonel with 34 years of logistical experience as part of what makes him a good candidate to continue his role as commissioner.

"My goal is to represent this county with financial stability, honesty, and the integrity to stand up for what is fair and the right thing to do," Watts said.

He explained that as the current commissioner he continues to learn while listening to the concerns of the community and developing solutions to management problems.

Challenging commissioner Rick Woodall spoke to the crowd about the events that led him to running for commissioner.

He cited his life of experience with small business

"I feel that the experiences I've had in my life, working at different places, doing purchasing, managing people, doing finances..." as providing him

with the skills to be a successful candidate for commissioner.

In addition to the practical experience necessary for the position, Woodall spoke of his character and understanding as reasons why he would like to become county commissioner.

"I have the ability and the common sense and the integrity," Woodall added.

The format of the evening allowed for opening statements from all candidates, followed by a formal question and answer session in which each candidate provided individual responses to the same questions, and concluded with a meet and greet period which offered attendees the opportunity to ask additional questions of candidates and talk freely amongst themselves.

The evening was organized by Rachel Mandeville and sponsored by the Roachdale Revitalization Cooperative Alliance.

The evening was meant to be the first in a continuing series of events created to celebrate social collaboration and encourage community involvement.

Comments
View 1 comment
Note: The nature of the Internet makes it impractical for our staff to review every comment. Please note that those who post comments on this website may do so using a screen name, which may or may not reflect a website user's actual name. Readers should be careful not to assign comments to real people who may have names similar to screen names. Refrain from obscenity in your comments, and to keep discussions civil, don't say anything in a way your grandmother would be ashamed to read.