by TRENT SCOTT, For the Banner Graphic 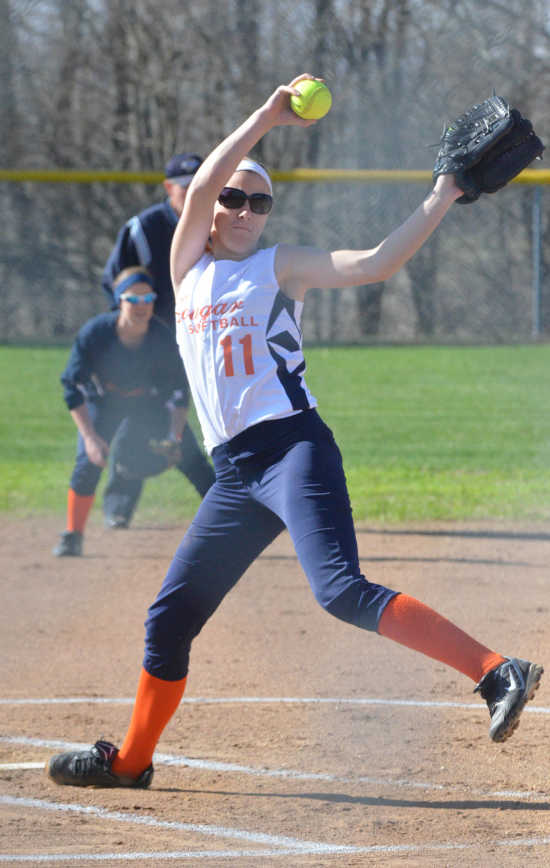 North Putnam pitcher Sabrina Surber winds up against Western Boone in the 10-0 loss on Saturday. Surber had three strikeouts with only three walks. The Cougars look forward to their conference match against Cloverdale Monday. (Banner Graphic/ Trent Scott)

ROACHDALE -- A beautiful Saturday morning at North Putnam High School gave way to a storm of hitting on the softball diamond after Class 3A No. 19 Western Boone pounded out 13 hits in five innings for a 10-0 win over the Cougars.

Assistant head coach Bob Clampitt, filling in for head coach Benny Ault due to the latter's ejection at Rockville on Thursday, said the squad handled the situation well but ran into a strong Stars squad.

"Any time the head coach is not here there is going to be some effect on the girls," Clampitt said. "Anytime you change things up or have people missing, that affects things.

"Western Boone is a good ball club and they hit the ball well. You have to take you hat off to them. They are a solid ball club and solid on defense."

North Putnam pitcher Sabrina Surber recorded three strikeouts, only gave up three walks and got the first batter of the inning out in four of the five innings of play.

The potency of the heart of the Western Boone lineup, however, was on display as the second through fifth hitters in the order notched eight hits, including four straight base knocks in the first inning to score the opening two runs of the contest.

Four more runs crossed home plate in the second as the visitors batted around in the inning to put the hosts in a 6-0 hole.

Surber got through the third inning unscathed before a pair of walks led to a pair of runs in the fourth inning and three singles pushed over the final two runs needed for the Stars in the fifth.

North Putnam's offense was restricted to a single by Sierra Spencer in the third inning and a Surber double down the left field line in the fourth.

Both runners were left stranded by Western Boone hurler Casey Clanton, who recorded four strikeouts behind the two hits and five total punch-outs on the day.

Even though the runs piled up quickly for the Stars, Clampitt said the Cougars never lost heart or interest in the game.

"Our girls were positive even though we lost by the 10-run rule," Clampitt said. "Our girls put the ball in play. We made a few errors but the girls keep working on things every time they come out.

"They go out and they try and as far as coaches, that's all we can ask for. We want them to come out, play hard and have fun, but we ran into a team that was better than we were today."

North Putnam will have a chance to get back in the win column as the squad re-enters WCC play Monday when they host Cloverdale.

Having only gotten one conference game in so far, the Cougars have a chance to make an impression on the standings but Clampitt said that the squad needed to come out ready to attack in the first inning.

"We talked about after the game that we need the girls to come out ready to play in the first inning," Clampitt said. "We need to come into games with the idea that we want to put pressure on other teams right from the get-go and not wait two or three innings.

"I think the girls understand that; we just need to find a way to get this done."