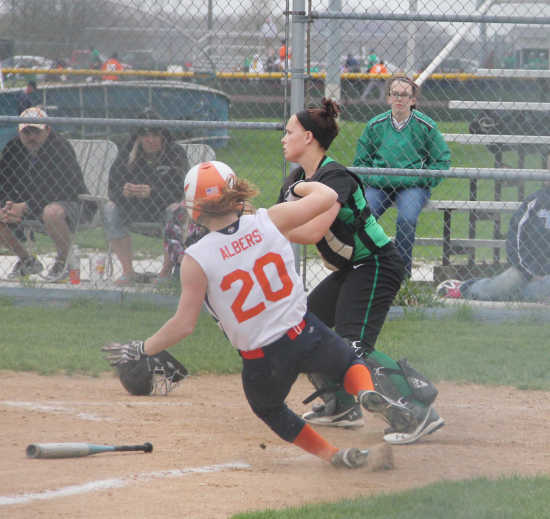 North Putnam junior Morgan Albers slides into home plate in the first game against Cloverdale. The Clovers fought hard but lost both games to the Cougars on Monday and Tuesday. (Banner Graphic/JAY LOCKETT)

CLOVERDALE -- It was a county softball outing and Cloverdale and North Putnam participated in a doubleheader on Monday and Tuesday. The first match-up was a close one, as North Putnam took the victory at home 9-8.

Cloverdale's freshman Lauren Meek was hit in the leg while pitching in that game but she finished the seven innings strong giving up 13 hits and striking out nine.

"She pitched well for a freshman," Clover coach Brian Knapp said. "When you give them a run in the first and then you look at the scoreboard that's the difference."

The run came on a Cloverdale error and allowed North Putnam's junior Sabrina Surber to score. However, after that first run the Cougars couldn't score again until the fifth inning.

"We need to get a faster start," said North Putnam coach Benny Ault. "We started way too slow we need to score and get some pressure on teams."

In that fifth inning the Cougars rattled off six runs started off by a single from sophomore Lauren Johnson.

The Clovers battled back. They scored in every inning after the third and really put the pitching of Surber to the test. Cloverdale junior Jessica Winders hit a double in the sixth inning and a triple in the seventh to rack up a few of her RBIs on the day.

"We hit the ball well," said Knapp. "Jess came up big for us at the end. When it's a one-run game what can you say. We played well. We'll try again tomorrow.

In the rematch, both sides saw big hitting but North Putnam still managed to come away with the victory, 8-5.

"I'm always proud of the girls," Ault said. "They executed well and they held the lead."

The lead was snagged early as Surber knocked one out of the park in the second inning.

Coach Knapp said there were adjustments to be made and they would have to be geared to stop scoring.

"We know they're going to hit the ball," Knapp said. "We have to play defense. We pride ourselves on defense and it's not where it needs to be right now. Everyone has good nights and bad nights. It's just a matter of getting through it. But we have three more games this week, so we'll see."

The sweep wasn't without bright spots for the Clovers. After two runs were scored in the second, Winders hit a solo-shot homer to give Cloverdale three runs. But they were only able to cross home plate two more times, with Meek scoring in the fourth and sophomore Lauren Patterson scoring in the sixth.

The pitching of Surber once again held the Clovers in check for the win.

"Since we played them yesterday, I kind of had to switch it up," Surber said. "They knew my pitches. They had my curveball and my change down but my defense had my back."