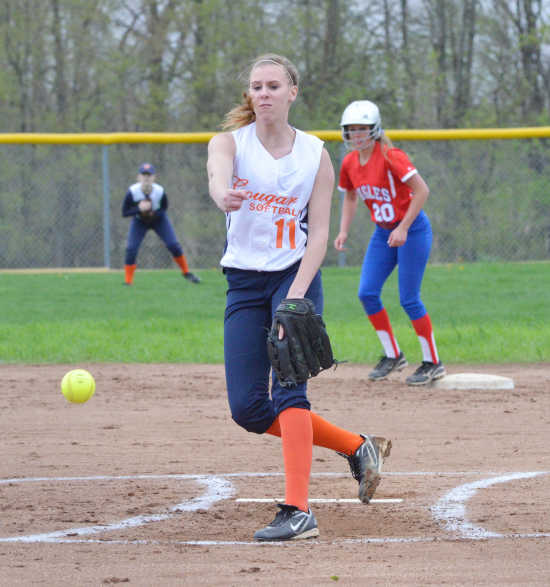 North Putnam had a grip on the game until a mistake rounding the bases. (Banner Graphic/TRENT SCOTT)

ROACHDALE --The wind could have very easily been the talking point of North Putnam's battle with South Putnam on the softball diamond Tuesday afternoon.

Instead, a missed bag on a home run trot ended up costing the host Cougars a victory as the Eagles held on for an 8-7 win.

South Putnam head coach Roshia Sullivan said that instead of letting the conditions and tough spots defeat them, the squad banded together and played better as the game progressed.

"The win was definitely a factor," Sullivan said. "(North Putnam) had some great hits in left field that we didn't catch but we stuck with and got the ball in quickly.

"I feel like we came in as a team and picked each other up. Even with the hits that were being given up, we stuck together and pulled it out tonight. In this game, they got frustrated but they used that to better themselves and the team."

Balls hit in the air went for a ride as a stern air stream refused to subside, meaning that fielding became far more challenging than normal.

Both squads took advantage of this early on as the visitors opened the game with a run on three hits that, under normal circumstances, likely would have been outs.

The hosts answered through the bat and legs of Bailey Ault, who doubled and eventually scored on a pair of balls to the backstop to tie the game at 1-1.

South Putnam answered with two in the third on an error after a bunt by Brooke Cundiff, a single by Makenzi Myers single and a double from MaKenzie Trisler that plated the pair.

Stow drove in Madi Asbell in the bottom half of the inning after the pair hit doubles to bump the lead back out to 5-3.

However, North Putnam's offense began to slow down and head coach Benny Ault said that the state of play eventually caught up with the squad.

We made too many errors," Ault said. "This was a weird game tonight. I can't understand why our offense stopped. I think the errors on defense made a mental block that stopped our bats."

Morgan Albers scored in the bottom half of the inning to tie the score at 6-6 but became the center of the game in the bottom of the fifth.

Johnston had singled before Albers hammered a shot over the center field wall that should have given the Cougars an 8-6 lead.

However, while rounding the bases, Albers missed second base and upon review, was declared out with no runs being scored.

South Putnam took advantage, scoring a pair of runs on three more two-out hits by Trisler, McHugh and Cassidy Vik to take an 8-6 lead into the final inning.

Fish singled and scored on a Jazzmin Laffin double but Laffin was stranded after a pair of pop-ups in the infield, leaving the Eagles celebrating and the Cougars reeling.

Sullivan noted that the squad constantly put pressure on the Cougars and it eventually paid off late in the game.

"We were consistently putting the ball in play up and down the lineup," Sullivan said. "If you can put the ball in play, that gives you a chance and that's what we needed."

The two squads meet again Wednesday at South Putnam to make up Monday's postponed matchup, meaning the Eagles would not miss three conference home games out of four played.

Ault said that the Cougars needed to return to the basics and not let a segment of South Putnam's squad do most of the damage.

"The girls need to play like they know how to play," Ault said. "They dropped a lot of balls today. We need to keep their top five hitters in check. That's where they hurt us tonight."

Sullivan said the squad would expect North Putnam to come out more focused and wanted her own squad to do likewise.