A 23-year-old man who led police on a high-speed pursuit halfway across Indiana after allegedly stealing a car in Illinois made his initial court appearance Monday afternoon in the first of likely four separate court legal jurisdictions. 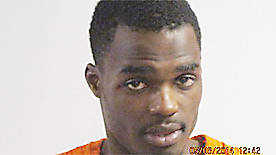 -- Resisting law enforcement, a Class D felony punishable by six months to three years in prison and a fine of up to $10,000.

Not-guilty pleas were entered for Davis on all three charges and he was ordered held on $10,000 cash-only bond.

Putnam County Prosecutor Timothy Bookwalter pointed out there is also a hold on Davis for both Marion County, where he ended up crashing a stolen 2104 Ford Escape at the end of the multi-county pursuit Thursday morning, and Mt. Vernon, Ill., where the vehicle theft reportedly occurred.

The most serious charges, the prosecutor said, could yet come from Hendricks County.

"We didn't have anything here where he endangered anybody very badly," Bookwalter told the Banner Graphic.

Authorities, however, have yet to hear from Hendricks County, where charges as serious as attempted murder seem possible against Davis. It was in Hendricks County where Davis reportedly tried to run over an Indiana State Police motorcycle officer along Interstate 70, just west of the Plainfield exit.

In Putnam County, the resisting law enforcement charge notes that the defendant "operated a vehicle in such a manner that it created a substantial risk of bodily injury" to Putnam County Sheriff's Deputy Jon Chadd, who initiated the pursuit about 8:37 a.m. at the Cloverdale I-70 interchange (41-mile marker).

The charge of receiving stolen property stems from the reported theft of the 2014 Ford Escape from a Mt. Vernon, Ill., car dealership.

The criminal recklessness charge, meanwhile, involves his alleged refusal to stop for law enforcement, driving in excess of 100 mph and reckless-driving activity that "created a substantial risk of bodily injury to another person."

When the chase finally ended in downtown Indianapolis sometime after 9 a.m. Thursday, Davis reportedly drove through a red light at Meridian and Maryland streets and crashed into another car, which then careened into a bicyclist. The other driver and female bicyclist suffered minor injuries.

That accident also resulted in damage to the Hard Rock Café building in downtown Indianapolis.

Davis then led authorities on a short foot pursuit into a nearby parking garage, where he was quickly apprehended on the third floor by an Indianapolis Metropolitan Police officer.

While being placed in custody, Davis reportedly spit in the face of the officer, at which point authorities put a sweatshirt over his head to keep him from further spitting at officers.

After initiating the pursuit at Cloverdale, Sgt. Chadd followed Davis through Morgan and Hendricks counties and into Marion.

The defendant's car "continued to pass vehicles on the shoulder and in the median." Chadd stated in his narrative, "while traveling at speeds between 100 and 135 mph the entire time."

Chadd said there were "numerous occasions" in which the driver attempted to run vehicles off the road or cause an accident in attempts to evade the deputy.

"The driver continued this erratic, reckless driving the entire length of Putnam County and continued to do so through Morgan and into Hendricks County," he added.

Judge Bridges appointed Trudy Selvia to act as defense counsel for Davis. A pretrial conference in the case has been set for 8:30 a.m. July 9.