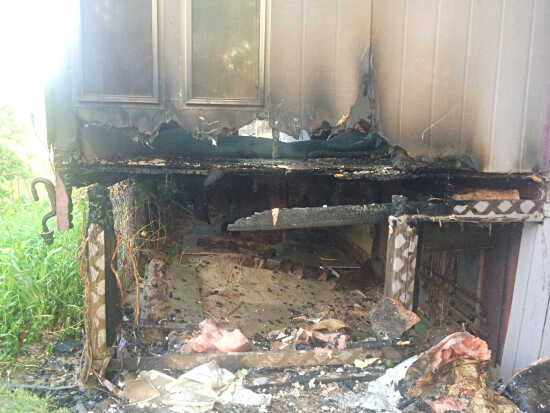 A Tuesday morning fire at a rural Reelsville cabin was contained to a small area of the structure, but the investigation is ongoing into the suspicious fire. (Courtesy of Reelsville Fire Department)

REELSVILLE -- The fire was out quickly but the investigation is ongoing following a Tuesday morning fire at a cabin near Reelsville.

Upon responders' arrival, smoke and fire were visible from the rear of the structure.

Greencastle Fire Department also assisted at the scene. Damage was less than $500.

While fire was extinguished soon after arrival, John McPherson of Reelsville VFD said the fire is considered suspicious.

"The fire was definitely set," McPherson told the Banner Graphic, noting that there were no electrical or water hookups in the area that could have caused an accidental fire.

Additionally, this is a summer/vacation retreat, so no one was around at the time of the fire.

The owners are Dave and Peggy Lilly in Greencastle.

McPherson also noted that a suspicious fire at the same location was set six or seven years ago. On that occasion, a Molotov cocktail was thrown through the front window.