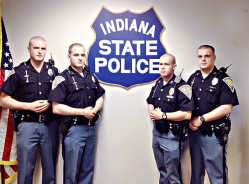 PUTNAMVILLE -- Four new troopers reported to the Putnamville District Monday, May 12 to begin their careers with the Indiana State Police.

James W. Crisp, 25, is a Hendricks County native having graduated from Brownsburg High School. Crisp then entered the Indiana National Guard where he has served for five years. During his military service Crisp was deployed to the country of Haiti for the New Horizon Mission.

Crisp, who is single and enjoys basketball and all-terrain vehicles in his spare time, will patrol Putnam County after his field training with veteran troopers.

Roman, who is single and enjoys physical fitness, golf and basketball in his spare time, will patrol Sullivan County upon completion of his field training.

Timothy J. Henning, 22, is a Morgan County native and graduated from Plainfield High School in Hendricks County. Henning is a graduate of Anderson University with Bachelor of Science degrees in criminal justice and Psychology.

Henning, who will patrol Sullivan County at the conclusion of his field training, is single and enjoys playing sports in his off time.

Kyle M. Hall, 23, is an Owen County native and a graduate of Owen Valley High School. Prior to the ISP Recruit Academy, Hall served three and a half years as a telecommunications operator (dispatcher) at the ISP Region III Dispatch Center at the Bloomington Post.

Hall is married with two daughters and enjoys sports of various disciplines in his free time.

The four were part of the 80 probationary troopers who graduated from the 73rd ISP Recruit Academy on May 1 with the ceremonies in the rotunda of the Indiana State Capitol. Gov. Mike Pence delivered the keynote address with the troopers sworn in by Brent E. Dickson, chief justice of the Indiana Supreme Court.

Their 25 weeks at the ISP Recruit Academy included more than 600 hours of classroom and 300 hours of hands-on practical and scenario-based training.

The four new troopers will continue training over the next three months with veteran troopers.

Upon successful completion of the many facets of field training, Crisp, Roman, Henning and Hall will be issued their own police commissions and assigned solo patrol duties in their respective counties of assignment.