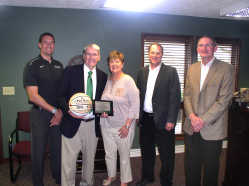 CLOVERDALE -- With 50 seasons now under his belt, Cloverdale High School basketball coach Pat Rady has not only become a member of the Indiana Basketball Hall of Fame, but a permanent figure in the Hoosier basketball scene.

The 73-year-old Rady started his basketball career as a three-year varsity player at Roachdale along with a two-year letterman player at Hanover College.

He went on to pursue his dream of coaching varsity basketball in Bainbridge, where he stayed for five years before having brief stints at Winchester for two years, Southmont for a year and back to Winchester for three more seasons before a five-year stay at Shelbyville.

The largest portion of his coaching career was spent at Terre Haute South, where he was the varsity coach for 24 years before coming to Cloverdale High School in 2002.

Having such a long list of accomplishments is certainly worthy of recognition, which Rady has received on numerous occasions. However, the Cloverdale School Board along with members of the community took the time to honor the storied coach during its monthly meeting Monday evening.

On hand to honor the coach for his 50 years of service to the game of basketball, was Athletic Director James "J.J." Wade along with Gary Neese and Todd Lewis of First National Bank.

"He has a unique ability, he's won at all size schools, to get the kids to do their best. He uses their strengths to further the team," Wade explained. "You'll often hear him tell the kids, 'you're playing for the name on the front of the jersey, not the name on the back.' It gets them to buy into it, he teaches them so many things."

Wade, who has had the pleasure of working with Rady for a number of years, also credited his wife Margaret of 48 years, his two sons Patrick and Michael as well as his faith for so many yeas of dedication to the game before presenting him with a plaque from the corporation.

"He's coached longer than we've been alive," Wade said laughing, noting his age of 37. "It's certainly amazing for anybody to devote that much time, dedication and effort to anything for that long is certainly worthy of an award. We certainly would like the 739 wins that he has to continue to grow here at Cloverdale."

Both Neese and Lewis also presented Rady with a custom basketball, which recognized his 50 years of coaching history.

"On the ball is your history," Neese said. "There's also a saying that is favorite to you -- 'The world doesn't need more basketball players, it needs more good fathers, more good husbands and more good workers in society.' I would like to add that we need a lot more coaches like Rady."

Rady humbly accepted the awards by thanking not only his family, but also each and every person that has helped him along the way.

"Whether it's the faculty, the administration, the secretaries, the cooks, the bus drivers or the custodians they've all been very supportive," Rady said thankfully. "It's been not only a pleasure but an honor to be part of the program at Cloverdale Community Schools."

Rady, who has not missed a single game in his 50-year history, is a man described by others as genuine. He is a man who is inspired by the challenge of forming a team, not just records and the championships.

Most will credit him for not only concentrating on developing the players' basketball abilities, but building their character as well, which was readily apparent Monday evening as one of his players was recognized as student of the month and Rady looked on with a smile.

"It's great to be part of a game that the people of Indiana love and cherish," Rady said. "The bottom line is, it's not the X's and O's, it's the Jimmys and Joes that win. I've been so very fortunate to have had some fine young men that have played so hard and are dedicated to our basketball program."

Over his 50 years as a head coach, Rady has seen it all and some would say that he's done it all. After Cloverdale's recent 19-2, 5-0 WCC season, Rady now has the second most wins in Indiana history with 739.

"I've been very fortunate, the good Lord has blessed me in so many ways," Rady said. "I'm glad my wife was here tonight because I don't get this kind of recognition at home."