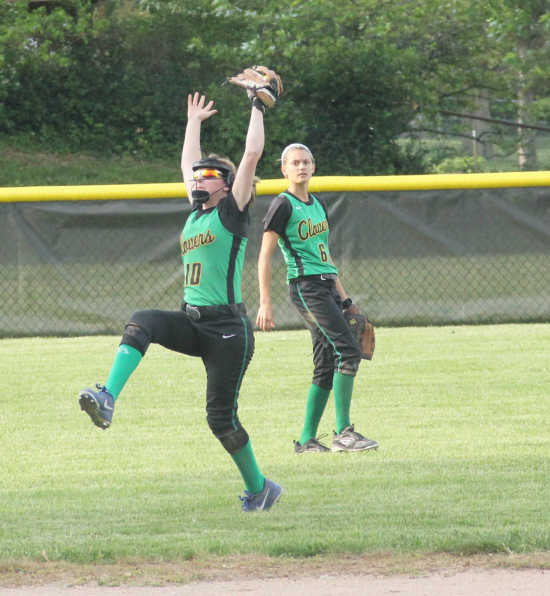 As of late it has not been the beginning of games that hurt the Greencastle Tiger Cubs' softball team, but when it turns toward the middle innings things start to go flat. During Saturday's county tournament they were tied with Cloverdale 2-2 in the fifth inning before losing 12-2.

Clovers' freshman Lauren Meek pitched both games in full like she has most of the season. Also, like the past few games, she struggled in the first inning. Once the damage is done in the first, she seems to get rolling again. 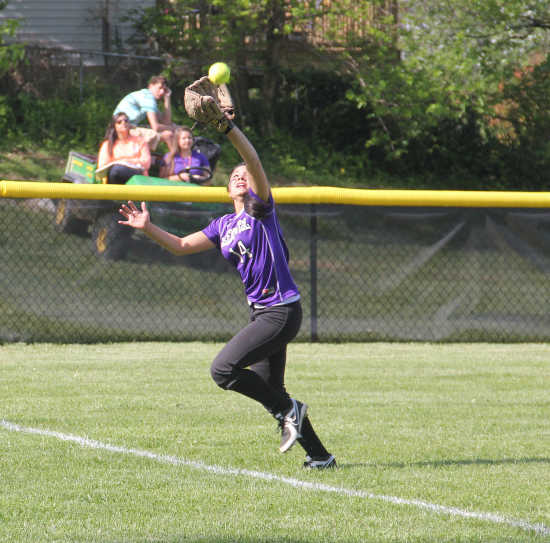 Greencastle's outfielder Kaylee Evans bobbles and then completes the tough catch while on the move. (Banner Graphic/JOHNATHON GOODE)

"She's a freshman. She's young," Clovers' coach Brian Knapp said, "It does take her a little bit. We got a little bit rushed tonight. We were a little bit late getting here. She didn't get a really good warm up in, and sometimes that plays an effect when you go on the road. That's the way it goes. They expect you to be ready when you get there and you never are."

In the first game freshman Kelsey Helterbrand and sophomore Kimmy Winders both scored. That was all the Clovers needed, but for insurance purposes they added three more runs late in the game. 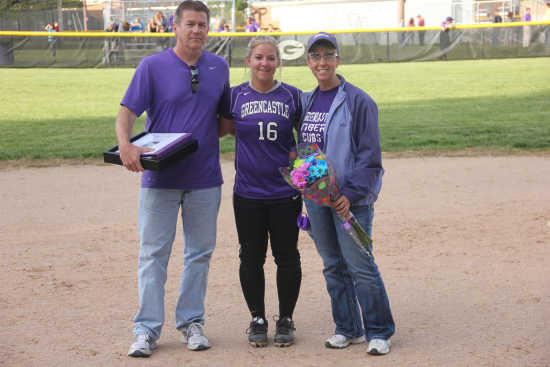 Danielle Thomas was honored as Greencastle's only senior during the break between games. (Banner Graphic/JOHNATHON GOODE)

It was the second game that got a little crazy. Greencastle were the visitors in this game and batted first to score three runs in the first inning. Senior Danielle Thomas, junior Courtney Adams and sophomore Paige Bragg all scored.

"We are just kind of tinkering with things," GHS coach Dave Keller said, "We just can't seem to get people on base and when we do we just leave them hanging out there. I can't put my finger on it.

We'll have one girl get a big hit and the next not come up. That's just softball.

Sometimes I kind of think we tighten up a little bit when we get people on base. We're young and there is a lot to look forward to with this group.

This was also the Tiger Cubs' senior night. Thomas was the only senior on the team and she celebrated by receiving flowers and more from her team and fan base.

"She's meant a lot," Greencastle coach Dave Keller said, "I've coached her for three years now, since she was a sophomore. She's been a captain now for two years. We've got a young, young group of players and she's been a good leader for these girls. It's good for the younger girls to get to see her leadership. She got a tooth knocked out at Sullivan and she didn't want to come out. She played with a torn shoulder all year. She has just led all year. It will be tough to replace her. There will be no replacing her."

Greencastle responded to its start by shutting down the Clovers three up and three down in the bottom half of the inning.

"My girls, they all want to take that first strike it seems like," Knapp said, "They want to get in the box, take their time and then be prepared to hit."

Ahead in the third inning after the Clovers had scored two runs earlier, Greencastle was trying to extend its lead. They did so successfully bringing Adams around to score.

With a chance to push things even farther freshman Regan Keller doubled and had a chance to drive in another run, but she over ran second base and was tagged out before sophomore Keenlee Johnson could score.

After that costly mistake by Keller the momentum changed and Cloverdale bounced over Greencastle. They scored two more runs in the fourth to take the lead and they never looked back.

"I think the wind got taken out of the girls when Grace got taken out," Keller said, "Grace has played third base all year and I think they were kind of shocked when she wasn't. She had to be taken off in an ambulance and they were ind of shocked. It could have been any number of things."

Freshman Grace Paul was who Keller was talking about. Early in the second game she slid into third hitting her head.

"Girls get settled in," Knapp said, "They get settled down and come to play. They know what they need to do. They have a job to do is the way we look at it. They go in and do their job, whatever they're told to do."

Both Winders girls were spectacular defensively for the Clovers. Jessica and Kimmy both made great stretches and tags that kept Tiger Cubs off the base.

Jessica also helped the catcher Heather Goss many times by running into foul territory to catch a ball.

The Cloverdale coaches were happy with their victories, but they went on to say there were more errors in these two games than they have seen in a long time. This is something they really want to clean up on.

"It's good," Knapp said, "It's always good to get a conference win, especially coming out of county. We just played them Saturday. It's always a struggle."