Excessive speed said to be a factor in Thursday afternoon accident 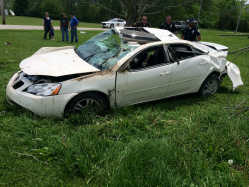 A single-vehicle accident that reportedly endagered the life of a 16-month-old child, occured Thursday afternoon just outside of Fillmore.

FILLMORE -- A 25-year-old Putnam County man is expected to be charged after being involved in a high-speed accident Thursday near Fillmore that reportedly endangered the life of his 16-month-old daughter.

The single-vehicle accident occurred at 12:38 p.m. as Ryan B. O'Neal, Russellville, was westbound on County Road 100 North, just east of County Road 750 East, when he lost control of his 2005 Pontiac G6.

Upon arrival of Putnam County Sheriff's Department Lt. Jon Chadd and Lt. Virgil Lanning, witnesses advised that the car had been seen traveling at an excessive speed, estimated at 80-100 mph, just before O'Neal lost control of the vehicle.

"Witnesses say, and based on the debris at the accident scene, the Pontiac G6 was traveling at a high rate of speed westbound," Chadd said. "He then ramped a small concrete bridge and lost control of the vehicle, causing it to flip several times on the south side of the roadway coming to rest in the yard of 7484 E. CR 100 N."

It is estimated that the Pontiac G6 flipped a minimum of five times, striking and destroying a stop sign and traveling approximately 550 feet, before coming to rest in the yard of Greg and Lora Gibson.

Watching the scene unfold, Ashley Gibson rushed to the vehicle as she heard O'Neal's daughter crying.

"The homeowner of that residence removed the child from the backseat of the car in her car seat," Chadd explained. "She heard it crying so, she picked it up in her car seat and moved it away from the vehicle."

All occupants of the vehicle, including passenger Adrian Fisher, 23, Fillmore, were transported to Putnam County Hospital via Operation Life. Chadd said the16-month-old child was kept overnight for observation of unknown injuries.

The investigation is currently ongoing as authorities await toxicology reports. Chadd noted that a report would be filed with the Putnam County Prosecutor's Office for possible charges of reckless driving, criminal recklessness and neglect of a dependent.

Also assisting at the scene were the Indiana State Police and the Fillmore Volunteer Fire Department.