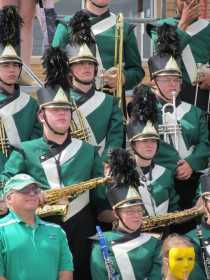 CLOVERDALE -- The Instrumental Music department at Cloverdale School Corporation has experienced many performance opportunities for the talented, hardworking students involved with the program. These contests and events occur outside of the regular school day. Student musicians, their parents, and instructors have made extra efforts to rehearse and perform to the best of their ability, being positive ambassadors for Cloverdale Community schools.

Performance ensembles began for the school with a Top 25 finish at the Indiana State Fair last August. That was followed up with an ISSMA GOLD rating for marching band. The next contests for the music department were held in February, March and April including organizations such as the Cloverdale Winter Guard, ISSMA Solo and Ensemble Contest, Pep Band, Jazz Band, Vocal Jazz Ensemble, Concert Choir, Concert Band, and the Cloverdale-Monrovia Independent Winter Drumline. Details of their achievements are as follows:

2. The Cloverdale Pep Band enjoyed an exciting season of performances at home basketball games. Student members of the Pep Band are