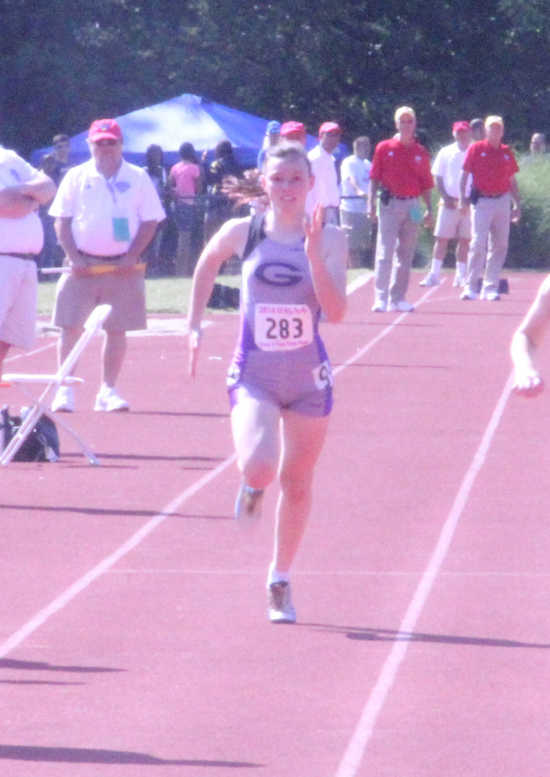 Katerina King completes her state trial run with a time of 13:13 seconds. As a sophomore she look forward to competing at state next year.
Order this photo

She qualified for state at regional with her third place finish in the 100-meter dash and King didn't take anything for granted.

I'm really happy, King said. "It's nice to see everyone and just to be around such competitive girls and getting to learn so much from coming here."

King ran in the third round's trials after qualifying with her time of 12.95, which put her in the 27th overall seed.

She ran with a time of 13.13 placing last in her run but, as a sophomore, this only leaves room for the Tiger Cub to grow and improve.

"To be a sophomore in the state finals that's outstanding," Greencastle track coach Garry Anderson said. "She's got two more years now to get better and better. Today was a good experience for her. It wasn't what she wanted but we're one of the top 27 in the state here. That's something to be proud of."

After winning blue ribbons in not just a few meets throughout Putnam County this year King is ready to train, get back in winning form for the upcoming track season and is already looking at another spot in next year's state finals.

"I'm excited to come back and see all the girls and hopefully compete with them again," King said.

Always a perfectionist, King, while proud of herself for making through to Indiana's elite, is not ready to settle with her time and is looking to improve both in the weight room and on the track.

"It wasn't exactly what I had expected, but I'm still very proud of myself. I'm going to keep staying in the weight room and working. I've going to be coming out of the blocks even harder every time and improving."