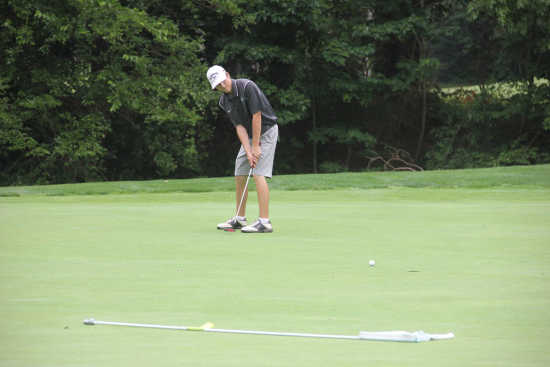 Rylan Mattocks takes a putt on the fourth hole. He was the low-man for Cloverdale with 79. (Banner Graphic/JAY LOCKETT)

MARTINSVILLE -- The Clover golf team took on 18 holes. They scored a 329 with Rylan Mattocks scoring a team low 79. Aaron Whitlock came in just under with an 80 and Freddy Fislar scored 82. Chase Snyder scored 88.

The score of 329 netted them a sixth-place sectional finish.

"We were very pleased to finally have a few things go our way. Our score at the turn was within striking distance of the leaders, but we couldn't sustain the consistency required at that level of competition, said Wokoun. "Our team score and Rylan and Aaron's scores would have advanced at many of the sectionals in the state. Unfortunately, ours is one of the toughest sectionals year in and year out, and one of the more challenging sectional courses." 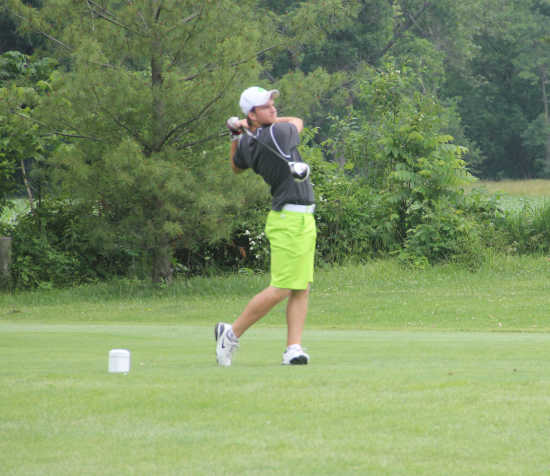 No. 1 golfer Freddie Fislar tees off on the 14th hole. (Banner Graphic/JAY LOCKETT)

Last year there was a change in the sectional match up and Cloverdale was left as the only local team in the Martinsville sectional, one of the toughest schools with the likes of Plainfield, Mooresville and Avon, each finishing in the first second and third spots respectively.

"Rylan caught a few tough breaks on the back nine, but played extremely well. Wokoun said. "He has gradually built his game and learned to grind out success when things don't go his way. Aaron had one of his best efforts, but ran into a few trouble spots on the back. It was a great final round to end his career at Cloverdale."

Whitlock said his mistakes on the course today will best serve his wisdom in his future golfing endeavors. 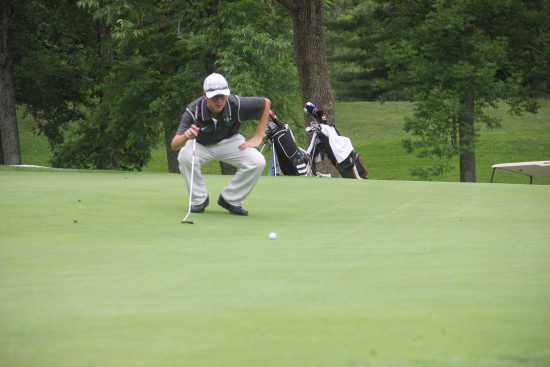 Chase Snyder of Cloverdale eyes up the green on the fourth hole of the Martinsville sectional. He nailed the birdie. (Banner Graphic/JAY LOCKETT)

"Today was real fun. It was a really nice day and I felt like I played pretty well," Whitlock said. "I think I did really well on my putting. My ball striking, I think I just made a couple of course management mistakes. I think I just should play it smarter."

Wokoun was able to notice several things in his underclassmen's game that would allow them to succed next year.

"Freddy has had tough luck all year, and that continued on the front nine," Wokoun said. "To his credit, he fought through that and had a better back nine." 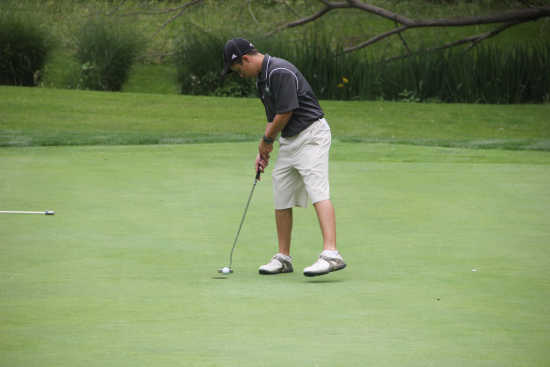 CLoverdale's No. 2 golfer Aaron Whitlock taps in on the 13 hole. (Banner Graphic/JAY LOCKETT)

Fislar, the No. 1 golfer on the team who will be coming back next season along with Mattocks and Snyder, believes his striking of the ball led to his successes. He scored two less on his back nine with a score of 40-42.

Coach Wokoun is pleased by the way his team was able to respond after some tricky holes at the Martinsville course, including a short ravine and a hill on the fourth hole.

" Chase had an excellent effort on the front nine, and overcame some things that might have gotten the best of him earlier in the season," Wokoun said. "He had some bad breaks on the back, but played better than his score indicated."

" On my front nine I was freshly starting," Snyder said. "I just couldn't keep it going. My irons mainly I need a lot of work with them. That'll be my main source of improvement later on."

Wokoun said that he and the lovers will become their rivals new fans as they cheer on the Putnam County participants at the Crawfordsville regional at 9:30 a.m. on Thursday.

"We are very pleased with our effort overall, and feel very good about the final round of our season," Wokoun said. "We expected our Putnam County counterparts to dominate at Crawfordsville, and we will be rooting for Greencastle and North Putnam at the regional, as well as Derek Chestnut of South Putnam. They are all to be congratulated for outstanding achievement in their sectional."