By ERNEST ROLLINS, For the Banner Graphic 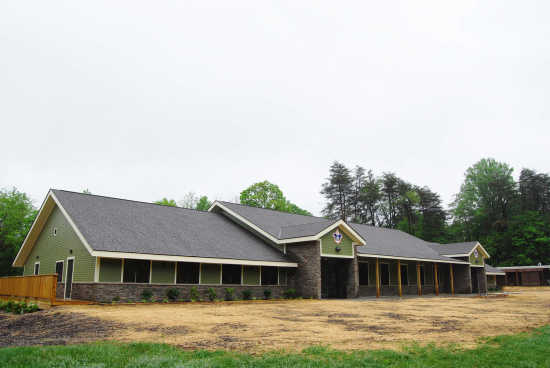 (Courtesy of Boy Scouts of America)

POLAND -- In the late 1950s, President of Pacers Sports and Entertainment Jim Morris was the leader of a different group of young men.

Morris was part of the camp staff at Camp Krietenstein located near Poland. On Tuesday he returned to the historic Indiana campground from his childhood and early adulthood, only this time as a distinguished camp alumnus for the dedication of a $1.6 million dining hall.

Morris was among many current campers, camp leaders and alumni who had the opportunity to dine in the new facility constructed to replace its 80-year-old predecessor located a stone's throw away. 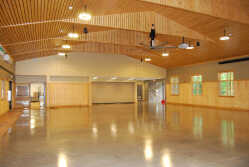 (Courtesy of Boy Scouts of America)

While his camping days may be behind him, Morris said the lessons learned while attending Camp Krietenstein remained with him throughout his life and had a tremendous impact on the person he is today.

He added Camp Krietenstein was the location of his first camping experience, and, as he got more involved in the Boy Scouts, his attachment to the area grew.

Morris said one of the great things about scouting is the memories, some of which included spending time in the previous dining hall's basement that doubled as sleeping quarters while he was a camp leader.

Crossroads of America Council Scout Executive Patrick Sterrett said the previous dining hall was built in 1934, and the new facility located across from the parade ground was a much-needed upgrade. In addition to the dining area, the new facility will act as home for camp offices and medical bay.

Sterrett said Boy Scouts of America started a campaign several years ago for a number of different projects and among them was the dining hall at Camp Krietenstein. The campaign raised approximately $10 million to go to the different areas. He added a large group of individuals are to thank for making the facility a reality from those on the financial side to others who physically moved the brick and mortar to the site.

"I was more excited when I started seeing them use it Sunday night," longtime volunteer Randy Keyes, an active participant in the project, said. "It is really the kids nowadays that brings the heart and soul into the place and make it what it is. I think the camp is going to develop a lot more."

Longtime scout and scout leader Albert Siebenmorgen has been actively involved with the camp for more than 75 years and remembers the construction of the previous dining facilities.

"I thought it was very, very well done," Siebenmorgen said of the new hall. "Basically, there is no comparison. (The old facility), in its day, served its purpose. Today, this modern dining hall is built ... to handle the increasing attendance that we have at summer camp."

The camp almost did not see this day, Sterrett said, as in the summer of 1972 it was on the brink of closing due to financial problems. He added if not for the leadership of Robert R. Pease and other volunteers, the camp's history may have ended that year.

Joanna Pease, wife of Robert Pease, said her husband worked tirelessly the winter of 1972 to ensure Camp Krietenstein remained opened for it was a place he cared about dearly. She added even after relief came with the news that the camp would remain open he still dedicated his time trying to improve the camp even more.

Pease said she couldn't have been more pleased with the work done years later to ensure the camp's success and was grateful to all who worked on the dining hall.

Camp Krietenstein first opened its doors in 1922 following a donation from George Krietenstein. The donation and the name was in honor of George's son, who died in World War I. Sterrett said the camp presently serves 25 counties in central Indiana.

"(There is) nothing more important in the life of a young person than a caring adult," Morris said.

Sterrett said the Boy Scouts seek to develop young men of character who would go on to be active members of society. He added the outdoors are just part of how the values are instilled.

"We hope this is the next stage of the next 92 years of a scout camp," Sterrett said.