East side, west side, all around the town, portions of nine Greencastle streets are ticketed for resurfacing work this summer in a nearly quarter-million-dollar project.

Some of the planned repaving is expected to cure major potholes that have proliferated in several locations, especially along Indianapolis Road in the eastbound lane in front of Super Wash and the westbound side in front of the Old National Bank branch, as well as along Round Barn Road south of Soapy Joe's and on Shadowlawn Avenue between Arlington Street and Dogwood Lane. 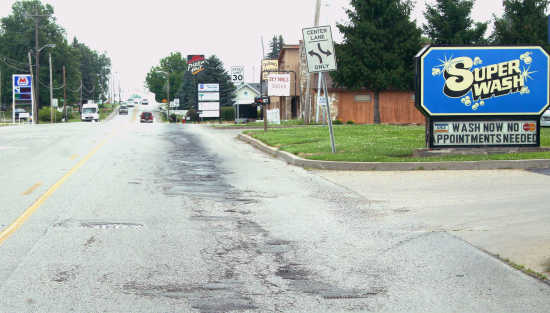 The pavement in front of Super Wash on Indianapolis Road, west of Fifth Street in Greencastle, has forced eastbound drivers to use the center lane in recent months to avoid a bumpy ride. It is scheduled to be repaved in the latest round of resurfacing work within the city

Drivers who frequent those routes have become well accustomed to avoiding the burgeoning craters that have developed along those streets by dodging into the middle of the pavement.

The 2014 resurfacing project, awarded this week by the Greencastle Board of Public Works and Safety, will be undertaken by Grady Brothers Inc., Indianapolis.

This year's resurfacing project bid outcome proved to be a reverse of last year's Greencastle effort which was awarded to Wabash Valley at a price just a shade lower than Grady Brothers.

The 2014 projects set for resurfacing, and divided among the city's four wards, are:

-- Indianapolis Road, the westbound lane only in front of Old National Bank and the eastbound lane only from just west of the Super Wash car wash to the easternmost driveway west of Sky Nails.

-- Maple Street, from north of Ohio Street to Bloomington Street.

The Board of Works also issued a notice of award and notice to proceed to Grady Brothers.

Mayor Sue Murray was asked about the Indianapolis firm's background.

"I know they have done the work on the Indianapolis Motor Speedway," she offered.