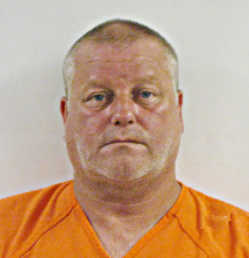 A Bainbridge man has been charged with two Class C felonies, four Class D felonies and one Class B misdemeanor following a Tuesday night incident in rural Bainbridge.

The most notable difference from Inman's initial charges is the lack of an attempted murder charge in connection to shots fired at Denver McMurtry.

Inman had reportedly shown up at the McMurtry home to shoot out the windows of McMurtry's vehicle. When McMurtry came out to investigate what was happening, he said he had to jump out of the way as Inman fired a shotgun from a range of two or three feet.

McMurtry sustained burns to his triceps, the shot passed so close.

Putnam County Prosecutor Tim Bookwalter explained to the Banner Graphic that attempted murder charges are among the most difficult for prosecutors to prove, as it is hard to determine intent.

Instead, Inman faces the two intimidation counts, which relate to both McMurtry and Jack Watson Sr., whose vehicle windows Inman also shot out a few minutes later, according to police.

In his interview with Putnam County Sheriff's Department Det. Sgt. Pat McFadden, Inman apparently said he was angry with both men and "wanted revenge."

McFadden also reported that Inman said he did not remember seeing McMurtry as he fired the shot.

Following the two shooting incidents, Inman led police on a chase that ultimately ended in a field behind McMurtry's home. After a nearly two-hour standoff, police disabled Inman's vehicle and took him into custody.

Inman's claim that he remembers neither seeing McMurtry nor the police chase led police to believe he was heavily intoxicated during the event.

McFadden's report also stated that a beer can was visible throughout the standoff and that Inman and his truck cab smelled heavily of alcohol.

Bridges entered a preliminary not guilty plea on Inman's behalf and appointed attorney Scott Adams to represent the defendant.

At the recommendation of Chief Deputy Prosecutor Justin Long, Bridges set Inman's bond at $25,000 cash. He also issued a no-contact order with McMurtry and Watson should Inman make bail.