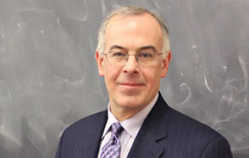 David Brooks, the New York Times columnist who is a keen observer of the American way of life and a penetrating analyst of present-day politics and foreign affairs, is coming to DePauw University on Saturday, Oct. 4.

Brooks, a bestselling author who also serves as a commentator on PBS' Newshour, will deliver an Ubben Lecture in Kresge Auditorium as part of Old Gold Weekend, DePauw's annual homecoming celebration.

The 7 p.m. speech by Brooks, which is free and open to the public, will culminate a special Old Gold Weekend at DePauw, further details of which will be revealed soon.

Brooks' column on the Op-Ed page of the New York Times started in September 2003. He has been a senior editor at the Weekly Standard and a contributing editor at Newsweek and the Atlantic Monthly.

He also spent nine years with the Wall Street Journal in a variety of roles -- as op-ed editor, editor of the book review section, movie critic, and as a reporter posted in Brussels, covering Russia, the Middle East, South Africa and European affairs.

Brooks is the author of "Bobos In Paradise: The New Upper Class and How They Got There," "The Social Animal: The Hidden Sources of Love, Character and Achievement" and "On Paradise Drive: How We Live Now (And Always Have) in the Future Tense" and is editor of the anthology "Backward and Upward: The New Conservative Writing."

He is also a frequent analyst on NPR's "All Things Considered" and the "Diane Rehm Show" and his articles have appeared a number of publications, including the New Yorker, Forbes and the Washington Post.

A 1983 University of Chicago graduate, Brooks worked as a police reporter for the City News Bureau, a wire service owned jointly by the Chicago Tribune and Sun-Times.

In a 2009 New Republic piece, Gabriel Sherman wrote that Brooks, whose leanings are generally viewed as conservative, is a powerful communicator who has the ability to observe and analyze the world we live in through a non-partisan lens.

"As much as any columnist, Brooks speaks to ... left-of-center suburbanites. After all, he is known for attracting liberal readers who normally can't stand conservative pundits."

Brooks told the publication, "I get a lot of people who say, 'I'm a liberal and you're the only one I read.' Sometimes, it can be a little condescending ... But you take the readers where you can get them."

The columnist has written, "Our moral and economic system is based on individual responsibility. It's based on the idea that people have to live with the consequences of their decisions. This makes them more careful deciders. This means that society tends toward justice -- people get what they deserve as much as possible."

In another column, he opined, "The nation's economy is not just the sum of its individuals. It is an interwoven context that we all share. To stabilize that communal landscape, sometimes you have to shower money upon those who have been foolish or self-indulgent. The greedy idiots may be greedy idiots, but they are our countrymen.