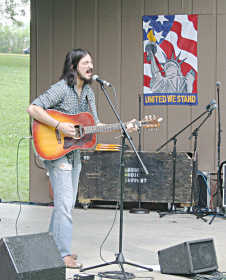 This week's ParkFest will feature music a pair of acoustic acts at the Bob Flanigan Bandshell.

Bob Sima and Gus Moon will take the stage for the 6:30 p.m. show at Greencastle's Robe-Ann Park.

This week's free performances are sponsored by Greencastle Civic League, Putnam County Convention and Visitor Bureau along with Steve and Kathryn Jones.

Food will be available for sale from the Putnam Inn.

Sima's acoustic tunes aim to speak directly to a listener, often being the inspiration or motivation that will touch one's heart, challenge one's mind and nourish one's soul.

The beauty of Sima's music is its eternal imprint that shifts and expands as one grows and evolves, always supporting a personal transformation and delivering the timeless and universal messages that you need at any given moment.

"With utmost and sacred devotion, I encapsulate in song my interpretations of the ancient and timeless wisdom of the ascended masters and the contemporary teachers I meet in this life," Sima said. "Each and every song I channel begins as my personal conversation with Source delivered as life lessons of spiritual growth and transformation.

"Just as these conversations birth expansion, awakening, and remembrance in me, I share my gift to soften the hardest of hearts, widen the narrowest of smiles, loosen the tightest of grips, lighten the heaviest of loads, and thin the thickest of walls of as many souls as I can possibly reach."

Mullis has been playing music since he was 11 years old, long before the awkward throes of young adulthood.

As Mullis' more evolved experiences of life and lost love moved him toward a genre that could better embody his feelings, he began to convert his musical expression toward the world of folk country and alternative rock. It was in this incarnation that Mullis music began to take its true and most beautiful form.

Born under the name "Bandit," Mullis's repertoire of original works began to bloom. Earlier compositions such as "Toward the Sun" and "Good Goodbyes" quickly captured the hearts of his audience with tales of bitter disappointments and tragic mistakes. His more graduated work "Become" is a masterpiece of self-realization. Written by the side of the highway, it tells an almost autobiographical account of his human vulnerabilities and limitations set to a hauntingly morose melody.

By the time "Dimmest of Stars" had been written, his singer/songwriter abilities had won the admiration of more seasoned artists, like Carrie Newcomer and Ron Dye. Other artists have covered some of Mullis's original works, literally singing praises to his creations.

These days, Mullis can be found playing solo acoustic under the alias Gus Moon. Although his artistic path has taken many turns, one thing remains constant in his work: a genuine expression of adventurous emotion and spirit.