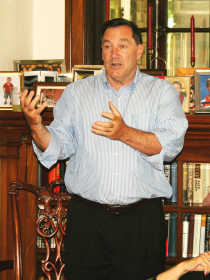 Saturday may have been Jefferson-Jackson Day in Putnam County, but it was Donnelly and Dale that local Democrats turned out to hear.

So J-J Day became D-D Day for Putnam Democrats who attended the late-afternoon reception at the home of Greencastle Mayor Sue Murray and husband Dave.

Gathered in the spirit of party forefathers Thomas Jefferson and Andrew Jackson, local Democrats listened to U.S. Sen. Joe Donnelly, making his first official visit to Greencastle since his 2012 election, and John Dale, trying to score his own upset victory and head to Washington to represent Putnam County and the rest of the 4th District in the U.S. Congress.

Donnelly asked the group, "Who are we as Democrats?"

"We are inclusive," he suggested, "and we are the party that looks to the future."

Nationally, he said, the party has been about creating job opportunities and investing in infrastructure while pioneering affordable health care for all Americans.

"You have a wonderful university and a great, growing downtown." 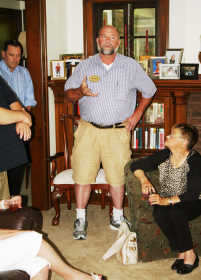 Putnam County Democrats not only had a chance to hear from a sitting U.S. senator Saturday afternoon as Sen. Joe Donnelly (above, left) visits Greencastle Saturday but also from District 4 U.S. House of Representatives candidate John Dale (left photo) during the Jefferson-Jackson Day reception.

Donnelly told the group that although he is a Notre Dame grad, it is often a DePauw University connection to which he turns for motivation.

A photo of the 2013 NCAA Division III champion DePauw women's basketball team is on the wall of his office, Donnelly said.

In that picture, the women are in a circle, holding hands, about to reach their ultimate goal as unbeaten national champs.

Not only does the photo epitomize hard work, teamwork and goals, Donnelly said, but it speaks to the Hoosier spirit of "who we are," the first-term senator added.

Donnelly also spoke briefly to a couple of national issues, including affordable healthcare (or the so-called "Obama-care" effort).

"For all of you who may have heard otherwise," he said, "the affordable health care act is working. Health care costs have risen at their lowest rate in 40 years."

Diabetics "can actually get health care" now, he said, even hearing a couple of personal stories from within the room about Hoosiers receiving health care coverage for the first time in 20 years or more.

The senator acknowledged that the argument over the health care system persists in Washington, but added, "We all agree, let's fix it. Let's make it better so it works for everybody."

Meanwhile, first-time candidate John Dale, who won the May Democratic primary in Indiana's 4th District by defeating Putnam County resident Jeff Blaydes and three others, will be challenging incumbent Republican Todd Rokita for his U.S. House seat in the fall.

A Western Boone High School teacher and wrestling coach, Dale brought his "John Dale on the Trail" district tour to town Saturday, asserting his belief that Congressman Rokita is "putting his own interests first" before those of fellow residents of Indiana's 4th District. 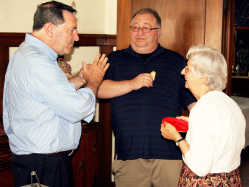 A Wabash College graduate, Dale stressed his education background during brief remarks, noting that he would "rather be investing in public schools than charter schools," which he says seem to "see education as a profit-making venture."

Noting that his 240-acre Westpoint family farm produces beans and corn, beef cattle and free-range chickens, Dale said his comments to local Democrats Saturday were "some of the stuff I'm getting hot about."