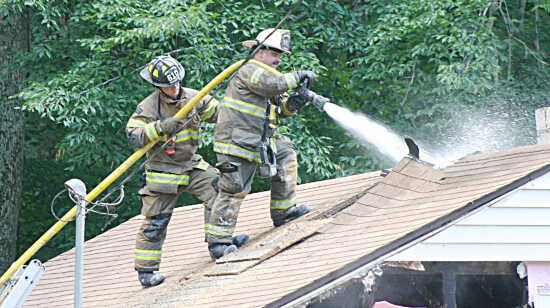 REELSVILLE -- Damage was extensive but no one was injured in a Wednesday fire at a Washington Township residence.

The Reelsville/ Washington Township Fire Department was dispatched to the home of James Cook at 3282 W. Ivanwald Dr. at 11:59 a.m. for reports of smoke coming from the home.

Two Reelsville firefighters arrived on the scene shortly after dispatch, finding smoke coming from the roof but no fire showing.

Upon the arrival of engines, firefighters made entry into the home and began knocking down the fire. External damage remained limited, outside of broken windows and holes in the roof for ventilation.

However, fire, smoke and water damage ravaged the interior of the home.

The other departments provided water as well as manpower for the effort. Bainbridge also provided its rehab vehicle.

The American Red Cross also responded to help the family with its needs following the fire.

While much of the fire was knocked down pretty quickly, firefighters continued to battle hot spots until around 2:30 p.m. Firefighters remained on the scene until after 3 p.m.

Reelsville Chief Brent Urton said no cause had been determined as of Friday evening, but it appears the fire started around the stove area.

No one was home at the time of the blaze.