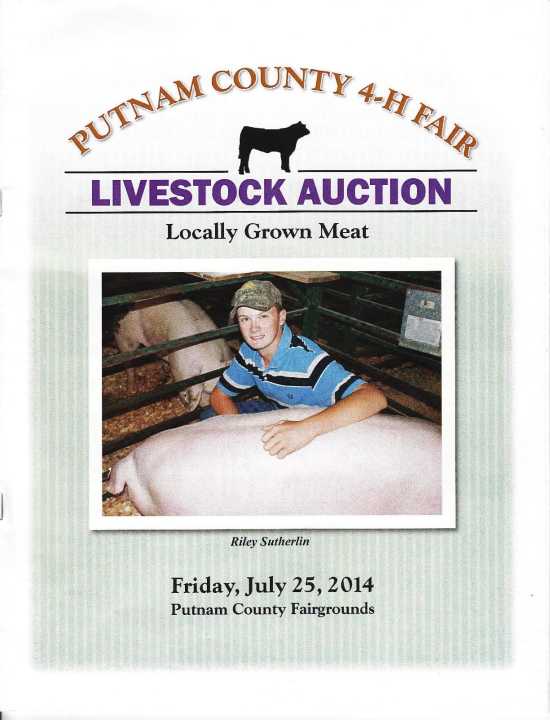 The program to the 2014 Putnam County 4-H Livestock Auction bore a picture of a smiling young man in a baseball cap, kneeling next to a white hog.

Below it was the simplest of captions: "Riley Sutherlin."

No further explanation was given. None was needed. Any bidders who walked in unaware of Sutherlin's tragic story certainly walked out with a better idea of the young man that he was.

Considering the way the night went, nearly every one of them made some contribution to the fund that bears Riley's name.

The 17-year-old would have completed in his ninth year as a 4-H'er last week before beginning his senior year at Greencastle High School next month.

Instead, Sutherlin lost his life in a June 23 tractor accident on the family farm in rural Greencastle.

The fair went on as it normally would, but little signs of Riley everywhere, from friends marching for him in the Fair Parade to various groups raising money for the Riley Sutherlin Fund to his market litter winning grand champion even in his absence.

The last two factors came together wonderfully on Friday night, as a barrow from the litter was up for sale to begin the swine portion of the auction.

Announcer Rick Johnston and auctioneer Jeff Rich let those gathered know that all money from the sale would be donated to the Riley Sutherlin Fund, which was established to invest back into the community in Riley's honor.

"Everybody mourns differently, but the community is there when they need them," Rich said. "And I'm talking about the Greencastle community and the Putnam County Community and this 4-H community that runs from 231 over to the horse arena."

Before opening the bidding, Rich read a note from Ron, Alana, Kendra and Dillon Sutherlin. Besides expressing gratitude for the kindness of the community, the Sutherlins shared their plans for the fund.

"Riley's passions are 4-H, FFA and farming, along with blowing smoke with his diesel truck," the family wrote. "Therefore, our goal, which we believe would be Riley's wishes, is to invest the memorial fund back into the community. This will be done over the next few years in the form of scholarships and grants to youth organizations in Riley's memory.

After assuring everyone they would have a chance to get involved, Rich opened the bidding, which started at an astounding $8,000.

Several quick bids later, the total reached the winning bid of $10,100, but the money didn't stop coming in.

Add-on bids totaling $2,400 were soon submitted, and cups were passed around the arena, collecting another $2,200. 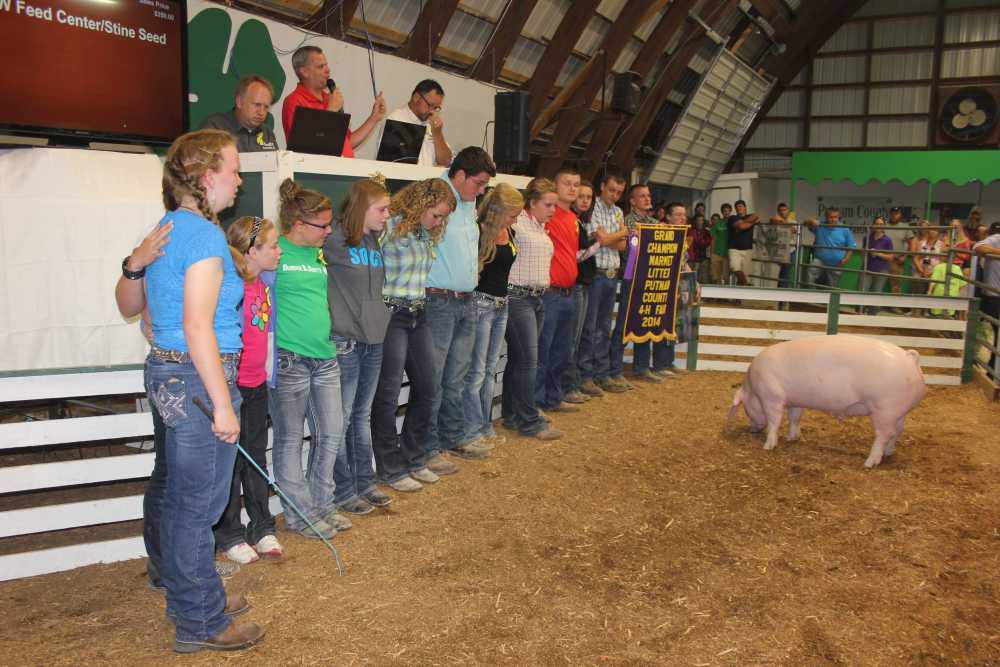 Friends and siblings of Riley Sutherlin support each other Friday as they wait for his hog to sell at the 4-H Livestock Auction. The animal brought in approximately $15,000, all of which will go into a memorial fund started in honor of the teen who died on June 23. With contributions from other 4-H'ers, about $20,000 will go into the Riley Sutherlin Fund as a result of the auction. (Banner Graphic/JARED JERNAGAN)

All of this went on as a number of Riley's friends, including his brother and sister, stood in the sale ring with the animal -- crying, wiping away tears, trying to smile and generally leaning on each other.

Rich and Johnston tried to keep up with announcing all the names of those who donated, but knew someone would be missed.

"I'm going to go out on a limb and say that this money came from all those who miss Riley," Rich said.

Add in all of the proceeds from the sale of Kendra's and Dillon's hogs, along with gracious donations from a number of other exhibitors from all barns, and the total raised on Friday comes to around $20,000, nearly 10 percent of the $205,000 brought in for the entire sale.

As impressive as the total is, more was raised during other fair week events, and more is likely to follow after the Friday outpouring.

"I know this family is going to find a way to make Riley live on in this community," Rich said. "And that will be possible because of your generosity."

Anyone wishing to make a donation to the Riley Sutherlin Fund may do so through North Salem State Bank.