CAREY FOX, For the Banner Graphic 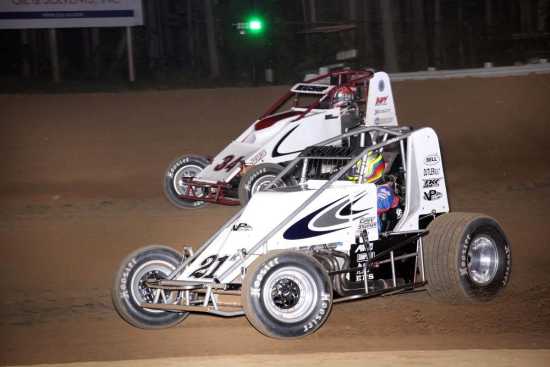 Casey Shuman (No. 21k) and Brent Beauchamp (No. 34) fight for the lead in the sprint car feature Saturday at Lincoln Park Speedway. Beauchamp went on to pick up his first win of the season at the Putnamville oval. (Banner Graphic/CAREY FOX)

PUTNAMVILLE -- Lincoln Park Speedway was bustling a week after rain put a damper on the weekend show midway through the heat races at the scenic Putnamville oval. This time around, the show went on as scheduled with first time winners bookending several drivers that are on a tear in 2014.

Brent Beauchamp has had plenty of success at LPS, winning a track championship in fact. However, he hadn't been able to crack victory lane this season, that is until he was able to hold off a hard charging Casey Shuman Saturday night to gain the victory over 26 other entrants.

Michael Williams has been in the racing business for three years, searching for that elusive first win and on Saturday he did just that, recording a bomber win in the final race of the evening. 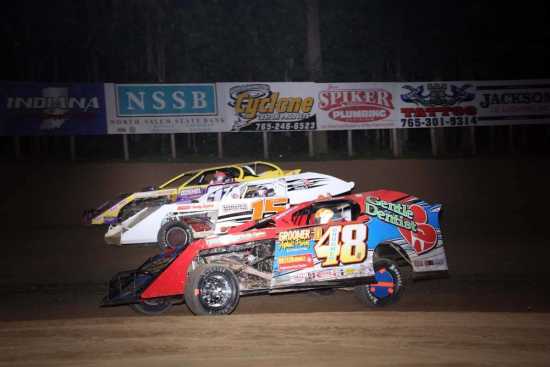 Derek Groomer (No. 48), Jimmy Hayden (No. 15j) and Kenny Carmichael Sr. (No. 92) go three-wide for the lead early in the UMP Modified feature. Groomer went on to win his second LPS feature of the season.

Shuman, Beauchamp and Chad Boespflug were heat race winners in sprint car action and started in the first two rows along with Lee Dakus.

Beauchamp and Shuman quickly took control from the green flag and found themselves in lapped traffic early on. Conner Donelson, Ethan Barrow and Max McGhee battled for the fifth spot behind Dakus and Boespflug.

A red flag came out on the ninth lap as Danny Pollock got upside down on the front stretch, but was uninjured. The restart wasn't kind to Dakus, who spun as the field went green once again.

The second half of the race came down to the battle up front as Shuman worked all angles in an attempt to chase down Beauchamp. The pair build a sizable lead and worked the final five laps in heavy traffic. Beauchamp hammered down through several lappers, but Shuman wasn't slowing his chase. On the final circuit, both drivers went to the top in turns three and four as Shuman made a strong attempt at the pass, but Beauchamp held off the Arizona native for the win. Donelson took down third ahead of Barrow and Brian Hayden. Jasonville's Brandon Morin rocketed forward from 15th to take sixth, McGhee was seventh ahead of Brazil's Eric Burns.

The UMP Modified feature proved to be an entertaining affair as three-wide racing for the lead highlighted Groomer's eventual win.

Bloomington's Jake Humphrey tried everything in his bag of tricks to make a pass stick on Groomer, electrifying the crowd by splitting two cars into turn one late in the A-main. He ran much of the final half of the race above the cushion in pursuit of that extra momentum.

However, Kenny Carmichael Sr. was also in the fray throughout most of the 20-lap event and he would lead at the midway point as Groomer and Humphrey battled ahead of Wes McClara and Kenny Carmichael Jr.

On a re-start, Groomer jumped to the lead over Carmichael Sr. and would stay there despite Humphrey's advances. Groomer stayed true to his line and the aggressive charge of Humphrey led to a lost spot when he jumped the cushion with a lap to go. Carmichael Jr. took over the second spot where he would finish ahead of his father and Humphrey with McClara in fifth. Roy Bruce Jr. fought off ignition box problems in his heat race to scrap to sixth after starting in 19th position. Damon Harrell, Jake Byers, Scott Ricketts and Dan Lewellen rounded out the top-10.

Greencastle's Josh Boller had designs on winning his first feature of the season as he led from the opening green flag over Cain. The do maintained those spots over the first 10 laps with Doug McCullough in tow ahead of Scott Carrington and both Carmichaels.

A caution flew for the slowed No. 92c of Carmichael Jr. at the halfway point of the feature. On the restart, Boller was able to hold his spot, running the extreme high line as Cain chose the bottom.

With three laps remaining, a last caution re-set the field for a dash to the checkered flag.

Boller and Cain spent the final circuits nearly door-to-door before Boller slipped slightly higher than his previous lines into turn four and Cain had just enough momentum to carry the win at the finish line. McCullough claimed third as Josh McDaniel came forward from 10th to place fourth ahead of Carmichael Sr. and Greencastle's Jonathon Newgent.

In the first bomber feature, Kevin Kemp, Eric Miller and Tim Wright were in a three-way fight for the top spot during the early laps.

However, Miller would get sideways and then upside down on the frontstretch, but emerged uninjured. Kemp was also sidelined in the mishap, which opened the door for Bumgardner to move into second and quickly challenge for the lead.

Bumgardner and Wright were side-by-side for a couple of laps before the Cloverdale native edged to the front and pulled away from Wright over the final circuits to add to his season points lead at LPS. Brazil's David Wallen placed third ahead of Jordan Almanza and Cody Wright.

In the final A-main of the evening, Harris of Monrovia, washed away three tough years in pursuit of his first victory and powered away from an early three-way duel with Tom Courtney and Bob Farris.

This weekend will feature the Midwest Sprint Car Series with $3,000 going to the winner. Modifieds, super stocks and bombers will also be on the card.