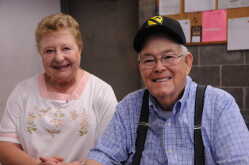 Cloverdale native Arthur Martin and wife Yolande relate their recent experience at the Grissom Aeroplex near Peru where Martin, an Army veteran of Vietnam who flew and maintained Huey helicopters for the 1st Calvary Division from 1967-68, was reunited with his med-evac unit and one of the copters he flew. Martin even got a chance at the controls again after 46 years.
Order this photo 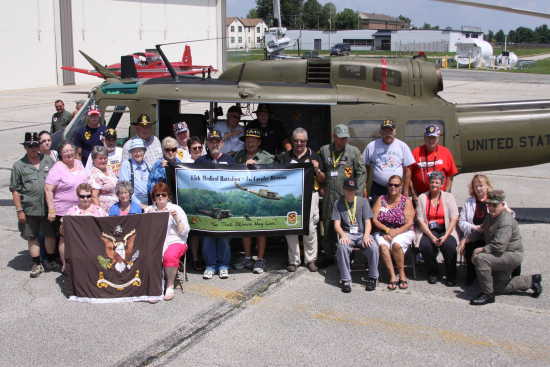 Members of the 1st Air Cavalry Division, 15th Medical Battalion, U.S. Army, who served together in An Khe, Vietnam, assemble in front of one of the Huey helicopters the med-evac unit utilized to extract the injured and wounded from the battlefield during their 1967-68 deployment during the Vietnam War.

You'll have to pardon Arthur Martin if his head is still in the clouds and his feet don't seem to be touching the ground.

Fresh from a reunion with fellow Vietnam War veterans of the 1st Air Cavalry Division, 15th Medical Battalion, U.S. Army, the Cloverdale native is still walking on air after his weekend experience Aug. 9-10 at Grissom Aeroplex near Peru.

The 78-year-old Martin wasn't only reunited with the men he served alongside during 1967-68 at Camp Radcliffe at An Khe in the central highlands of Vietnam, but also with one of the Huey helicopters they employed on missions recovering the injured and wounded from the battlefield.

Martin explained that he was maintenance officer and test pilot for 12 copters based at An Khe. The copter he flew in last weekend and took controls of above the Hoosier countryside is one of those very choppers he was responsible for in Vietnam.

"It's got 9,000 hours on it," he said of the copter in question, adding that doesn't mean it escaped all that action unscathed. 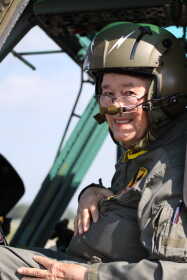 "It took a few bullet holes," Martin assured before adding of his recent flying adventure, "It was good to be up flying for once without somebody shooting at me."

"It's the very one," Martin said, noting the number is also on the Huey's tail. "It flew better than it did when I was in Vietnam.

"We used to swear at them," he said of the Hueys and keeping them airborne, "but when we finished up, we'd swear by them."

The Hueys usually carried a crew of four on med-evac flights -- a pilot, mechanic, medic and gunner -- with machine guns mounted on either side of the aircraft to provide cover in the battle zones.

While Putnam County and most of Indiana was getting drenched under gray skies most of last Sunday, Martin and his cohorts enjoyed the friendly skies.

"Nothing but blue skies," he smiled. "The Good Lord was watching over us all the way." 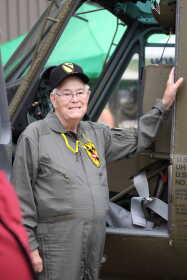 Cloverdale native Arthur Martin examines one of the Huey helicopters he was responsible for during his 1967-68 stint in Vietnam. Martin got to fly the copter again last weekend during a unit reunion at the Grissom Aeroplex in Peru.

Martin, who grew up east of Cloverdale on State Road 42 on the family hog farm of James and Margaret Martin, is the last of their seven children (five boys and two girls). He and his wife Yolande now reside in Dandridge, Tenn., at the base of the Smoky Mountains.

After graduating from Cloverdale High School in 1954, Martin said he "joined the military, went to flight school and went off to fly helicopters."

Marine copter pilot John Walker, who lives at Peru, has helped start the American Huey Helicopter Association and hopes to open a museum at the Grissom Aeroplex.

"He (Walker) discovered I was the maintenance officer on it, and invited me to come fly it," Martin said. "He rebuilt it and restored it. He did a great job on it."

But that Martin made it to the reunion at all is amazing, his wife of 55 years told the Banner Graphic.

Now Martin is eager to do it all over again next year and plans to be in Peru for a reunion of the entire company in 2016.

Martin was even able to take his niece, Bonnie McDougal, a 1976 Cloverdale High School grad, up during the weekend event.

"I was in high school during Vietnam," she said. "So I grew up with that stigma, if you will. It was a bombardment every night on the news.

"To sit in one was just surreal," she added. "They did a 20- to 30-minute re-enactment where they were flying in formation coming at us. It was just like watching the news all over again."