Second half is not enough for Tiger Cubs

By JoHNATHON GOODE, For the Banner Graphic 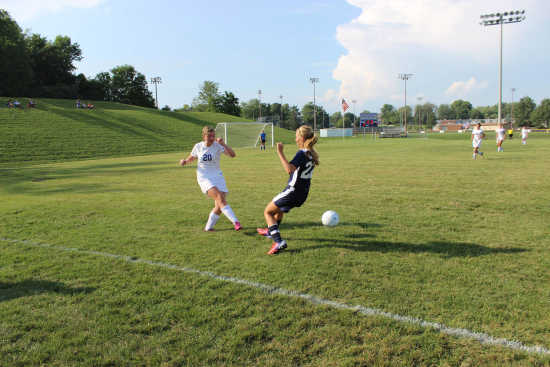 The Greencastle girls' soccer team opened up its season in overcast conditions with storms in the area Tuesday night. With lightning in the area the game was ended prematurely with Tiger Cubs falling to the Tri-West Bruins 5-2.

12 minutes into the first half Bruins' (1-0) sophomore Paige Newton scored and from there until late in the half they controlled the game. 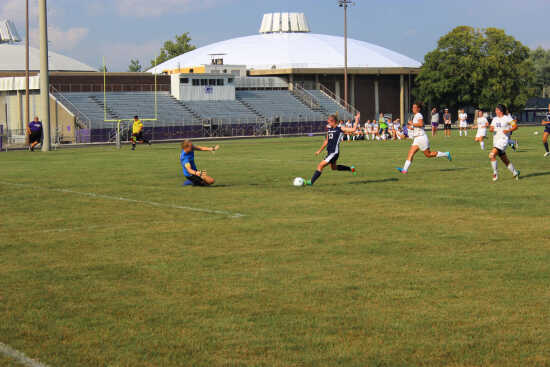 Amelia Smith dives for a save at the goalie position. (Banner Graphic/JOHNATHON GOODE)

Greencastle (0-1) had a tough time getting to the ball because Tri-West was out-hustling them. Greencastle only kept the ball on their side of the field for less than eight minutes in the half.

"They were definitely out hustling us in the first half," Week said. "I'd have to say in the second half it was even-stevens."

With 10 minutes left in the opening half Newton, once again, scored. She kicked the ball over junior goalie Amelia Smith's outreached hands grazing her fingertips. 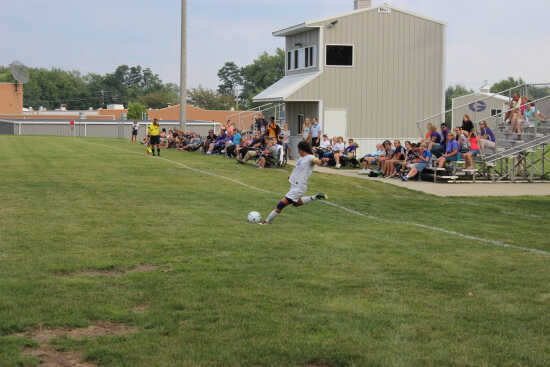 It was not much longer that Bruins' senior defender Savannah Harris put the ball in the air for junior Hayley Stroup. Stroup was able to head it in with minimal contest.

Greencastle was down by three and about to go into halftime shutout. Thanks to a loose ball ending up on the Greencastle side, the Tiger Cubs drew a penalty inside the 16-yard line and put senior Sydney Secrest on the penalty kicking line.

With no pressure from anyone but the Bruin goalie, senior Karen Jones, Secrest was able to place the ball in the net with 22.7 seconds left in the half, getting that zero off the scoreboard and taking the Tiger Cubs into halftime with something intriguing to think about.

The Tiger Cubs came out of the intermission looking like a team. They kept the ball on their side of the field for most of the opening part of the second half and made eight runs in 20 minutes compared to the two total they made in the whole first half. They had six shots on goal in the second half, as well.

"I think we made more markings on people," Week said. "We had our mind on the game. We were thinking about spacing and giving a position a particular job. We were able to successfully shut down a few of their key players."

Greencastle cut it down to one with 30 minutes left in the game on an oddly kicked ball by Secrest. A penalty was drawn and it set her up on the left side of the field where she kicked a spinning ball off course into the net. The ball looked as if it were going to sophomore Whitney Weinschenk but took a turn for the net just before it went to her head.

"We went out with a charge," Week said. "More like we are used to. I think we had our early season jitters out."

Secrest was widely seen as the given leader of the Tiger Cubs. Besides scoring both goals, she started three runs and put her teammates in place.

"She's one of our captains," Week said. "Sydney's a senior and has been a big leader this summer. She's a key defender, but at the same time she's quick on the ball. She's there for our PKs and she's there for our go to situations."

With 25 minutes left Weinschenk had a chance to tie the game up from two yards out, but Jones made an incredible stop catching the ball of her foot.

Greencastle had more chances toward the end to score, but by then it was out of hand.

Jones' save boiled up energy in the Bruins and they scored less than two minutes later. Turner was assisted by senior captain Madison Sprecher to put them up 4-2.

With just under three minutes left Stroup scored on a Newton assist to put the final dagger in the game.

It was not more than twenty seconds later that lightning was spotted and the game ended with 2:40 left.

This could have been a possible sectional matchup come later in the season. Both teams play in the same sectional and this matchup could be very helpful to both.

"Suring up our midfield is going to be key for the season," Week said. "Capitalizing on speed we have and putting ourselves in more dynamic situations is also our goal. We have a lot of underclassmen that I think are going to shine."