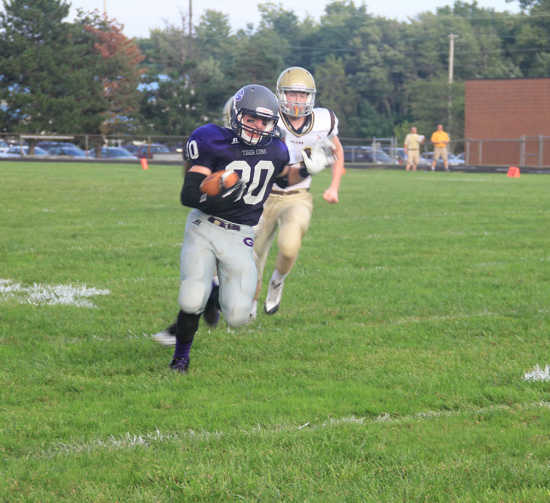 Devon Clar makes a run to the outside gaining 30 yards on the first offensive play for Greencastle. (Banner Graphic/JAY LOCKETT)

Greencastle football came out against Speedway and showed off their talent early. But the Speedway Sparks proved too much and mistakes plagued the Purple and Gray as they took the loss, 28-7.

After a defensive stop, sophomore Devon Clar gained 30 yards on Greencastle's first run from scrimmage. The first drive was capped by an eight-yard pass from sophomore Nick Costin to Nathan Tesmer.

"We just had a gameplan that we were going to do what we do," Greencastle coach Ryan Spoonmoore said. "We got a new offense in for these guys and we felt like we could run the sweep and runs some bellies. We had a big nice run on that first play. Nathan did a nice job getting across the end-zone. We were just running our offense."

As the game progressed Speedway was able to put together two consecutive scores before halftime. The first was a Chris Valentine score to his running back Andrew Fritz and the second came after a long Speedway drive that ended with the 6-foot-2 Shannon Hall punching in the one-yard touchdown run.

After halftime the Tiger Cubs were slated to receive, but they fumbled the catch and the Sparkplugs were able to gain possession leading to another Speedway touchdown, this time by Jerome King.

In fact, Greencastle had a little trouble holding onto the ball, fumbling four times losing two including one in the fourth that killed a drive.

"High and tight is our rule," Spoonmoore said. "These guys need to have that reiterated (Saturday) in film and get ready to practice next week. They need to have a better care and better concern for the football. Those are fixable mistakes."

After the turnover in the fourth Speedway capitalized with a Valentine pass to wideout D'Ante Wilcher sealing the final score at 28.

Next Friday the Tiger Cubs travel to West Vigo to try their luck at the Vikings.

"We're just going to go to work and work on the Tiger Cubs," Spoonmoore said. "We are going to get our gameplan in this weekend."

The first year head coach said that it's going to take a team effort to win games this season and he looks forward to getting back to work this week.

"A few let downs here, that happened on both sides of the ball," Spoonmoore said. "It takes 11 on the field at the same time. Its not one guy. It takes all 11 to play with one heartbeat so we'll get there."