By Caine GARDNER, For the Banner Graphic 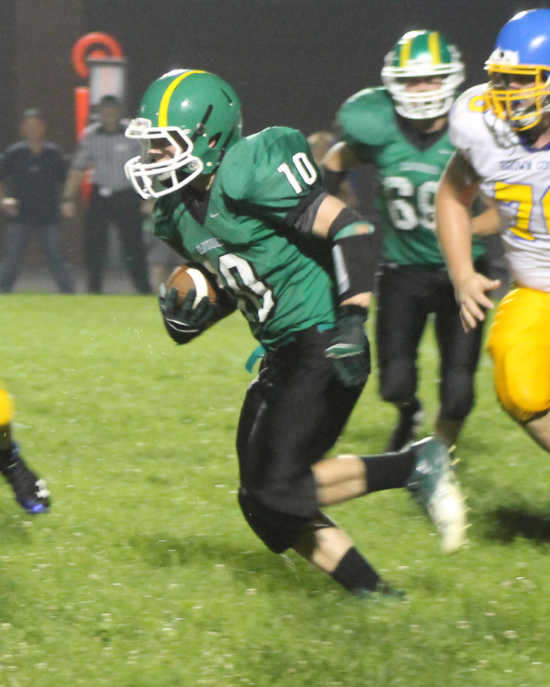 Cloverdale senior Ethan Boyd (10) scored the only touchdown in the Clovers' 6-0 win over Brown County Friday. Just as big, though, was his running on fourth-quarter rushes like this in a drive that saw the Clovers erase more than seven minutes of clock to preserve the win and the shutout.

CLOVERDALE -- When football fans hear the phrase "The Drive," images of Denver Broncos legend John Elway leading his squad 98 yards to tie the AFC Championship game against the Cleveland Browns and ultimately win in overtime no doubt come to mind. However, after Friday's season-opener, the phrase might have a whole new meaning for Cloverdale fans.

Fans were able to watch the "Green Machine" eat up more than seven minutes of the clock in the fourth quarter en route to their 6-0 win over Brown County.

Cloverdale's drive consisted of 13 plays, gained 76 yards and dropped the clock from 9:57 to 2:08. A nice way to close the game and something Clover head coach Jarrod Duff liked to see from his squad.

"Offensively we run option," Duff said. "We don't have very many power runs on our offense, so we use misdirection, option schemes and there was no option schemes, there were no misdirection -- there was nothing fancy about that last drive. Sometimes to put a game away you have to run it when they know you're going to run it and still pick up first downs.

"Our defense played fantastic. Coach (Scott) White did a job calling the defense, a great job preparing those guys all week and I was confident in our defense, but it sure made me feel a lot better not having to play defense one more time."

Defense was the name of the game for CHS Friday. On Brown County's opening series, freshman Tyce Jackson busted through the line to collect a sack. Teammate Troy Davis followed that by grabbing an interception to stall the drive.

The Clovers forced three turnovers on Brown County's first three drives of the game. After Cloverdale turned the ball over on downs, Tyler Lotz blasted the Brown County quarterback, knocked the ball loose and watched as fellow Clover Jackson Szczerbik jumped on the ball to give the Clovers possession at the five-yard line.

On the very next play, Ethan Boyd took the handoff from Brandon Hughes and zig-zagged his way into the endzone, giving Cloverdale all the points it would need on the night.

The Eagles gave the Clovers a scare on their next possession as they drove the ball inside the Clovers' five-yard line for a first down. Szczerbik shot through the line for force a two-yard loss on the Eagles' first play and that set the tone. The defense was challenged and it did not back down.

Three plays later, Cloverdale fans cheered at Hughes took a knee to send the Clovers into the locker room with a 6-0 lead following what Duff pointed out as the pivotal moment of the game.

Cloverdale's defensive dominance continued in the second half as Nick Winders sacked the Brown County QB, forcing a fumble and Robert Buskirk scooped the ball and rumbled down the field to stop the Eagles' first drive in the second half.

The Cloverdale defense also collected a interception from Fred Fislar and a sacks from Lotz and Max Secrest to all to its turnover treasure trove.

And it was Cloverdale's defense that sealed the game. Following "The Drive," Brown County had visions of driving down the field for the win clearly in mind. However, that vision was blinded by the streaking green No. 4 jersey of Secrest speeding past the Eagles' line for the sack and the No. 77 of Lotz snatching up the fumble to allow the CHS offense to line up in the victory formation.

Duff, clearly overcome by emotion, talked about those final moments as the clock ticked to zero.

"When that moment happen," he said composing himself. "I care about my players -- I love them and I told them, and I know they know how I feel about them, I was happy for them. They've worked so hard, and these seniors especially, have been through a lot and they haven't won too many games in their careers. And to be able to just gut one out and win the way we did, and to start the season 1-0 -- it was a great feeling."

Duff also praised the play of his backup quarterback after starting quarterback Duke Duff was injured in the team's scrimmage the prior week.

"We didn't want to put too much on Brandon Hughes, but he did a great job. That kid was so coachable this week. He did a great job listening and keeping his composure and I was really proud of him."