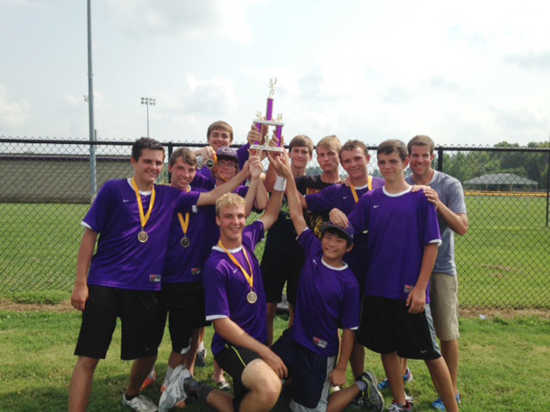 The Tiger Cub boys' tennis team pose with its trophy after winning the Sullivan Invite. They have won their first two matches of the season. (Banner Graphic/JAY LOCKETT)

Greencastle's boys' tennis team has gotten off to great start to the season. After coming out on top in the Sullivan Invite, the team saw victory again in its second match against Edgewood. First-year head coach Kevin Rowe, says that the advantage was gained early in the summer during the tennis camps.

"This summer we hosted a couple of high school and even middle school camps," Rowe said. "It was a little earlier than Greencastle typically will get out there but I wanted the guys to really compete this year. So I figured I'd hold my own camps and work on form and a variety of drills to help them learn and be more competitive than in the past."

Last season the boys competed in the sectional semi-finals before being knocked out by Owen Valley. This year the team returns with force and confidence as the players set their goals even higher.

"We have high expectations," Rowe said. "We knew we were coming in with experience. It's rare to have five seniors on varsity. But they are also hungry to win. We're shooting for a regional championship and we are hoping to go even farther than that."

With the team leaders running the show, Rowe says that Greencastle's strengths stand out on the court.

"It starts with the leadership," Rowe said. "Then it is the younger players' willingness to learn. In doubles and singles they were able to come in with a lot of experience. They were able to pick up a lot of ideas and new ways to be effective in their game. They're hitting shots with more confidence. They have a much higher sense of self-awareness. They are really putting in the time to be the best that they can be."

Being a first year coach, Rowe acknowledges that the transition period was tough on players but he believes his coaching style is right for the Tiger Cubs.

"I lead a much more structured practice. I've got higher expectations. I hold the kids accountable for their play. I'm always running with them and hitting with them," Rowe said. "I think that's a rare thing today. I just want to show the players I do care about them. They trust me and I give them that trust back. It's worked really well this year."

Rowe believes that teams won't be ready for a revamped Greencastle team, who will be more sound in many more ways.

"I want to give thanks to the parents. They've been really supportive. I think we are going to surprise a lot of teams that haven't seen us play this well in the past.