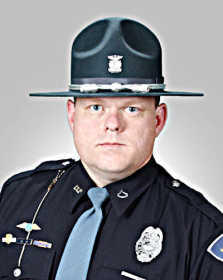 Sgt. Hayes, a Putnam County native, is now assigned to the ISP Training Division to serve as a South Zone Field Training Officer. Hayes received his promotion through written testing and a competitive interview process.

In his new capacity, Hayes, an 18-year veteran of the department, will be responsible for training south zone troopers in tactical firearms, all firearms qualifications and practices at the district level in the south zone, as well as training new recruits at the ISP Recruit Academy.

Hayes began is law enforcement career in Clay County as a Brazil City Police Officer from 1990 to 1994. During that time, he graduated from the Indiana Law Enforcement Academy Basic School in 1991.

In 1995, Hayes was accepted into and graduated from the ISP 52nd Recruit School and originally sent to the Evansville District. Later that year, he transferred to the Putnamville District and began patrolling Putnam County.

During his tenure with the ISP, Hayes served 11 years as the Putnamville District Firearms Instructor, 17 years as firearms instructor at the Indiana State Police Recruit Academy, three years on the meth suppression team, and a member of the ISP SWAT team for 10 years.

Hayes is the recipient of the ISP Combat Action Award for his involvement in a hostage crisis.

Sgt. Hayes is a graduate of Greencastle High School and he and his family reside in Putnam County.