Brady Short is King of the 'Putnamville Clash' field 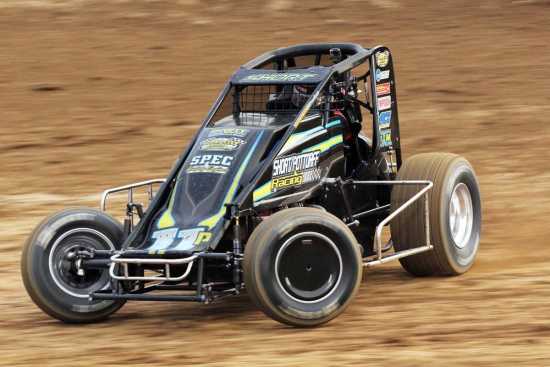 Brady Short (no. 11p) drops the hammer through turn one on his way to a victory in his heat race on Saturday night. (Banner Graphic/CAREY FOX)

PUTNAMVILLE -- Lincoln Park Speedway was one of the few tracks to avoid a rainy Labor Day Weekend and provided a wealth of excellent racing on Saturday evening.

Jesse Cramer won an extremely entertaining 11th edition of the 'Patriot 100' race for UMP Modifieds. Cramer, a Spencer, Ind. native, held off a wild challenge over the final 15 laps from Gabe Menser and Tyler Nicely to win by barely a car length and pocket the $3,000 winners share.

In the 27th running of the 'Putnamville Clash' for sprint cars, Brady Short chalked up his 11th feature win of the season in dominating fashion as he pulled away to win over Hunter Schuerenberg and Jerry Coons Jr. 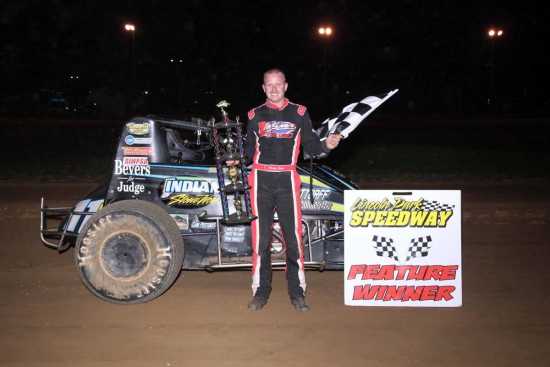 Tyler Cain won his 17th UMP Super Stock feature of the year to further solidify his national title hopes as he topped Steve Peeden and Jamey Wilson. In dual bomber features, C.J. Bryan edged out Jordan Almanza in the first A-main and James Walters was credited with the win in the second after Tyler Neal was disqualified for an illegal transmission.

Thirty-seven modifieds were in the pits for the highlight race of the season for the class and the drivers did not disappoint the fans. Levi Kissinger, Cramer, Nicely, Clint DeMoss and Kent Robinson were heat race winners as just the top-two were taken out of each heat. The twin B-mains were stacked with exceptional talent as the top-five from each received a coveted spot in the A-main. 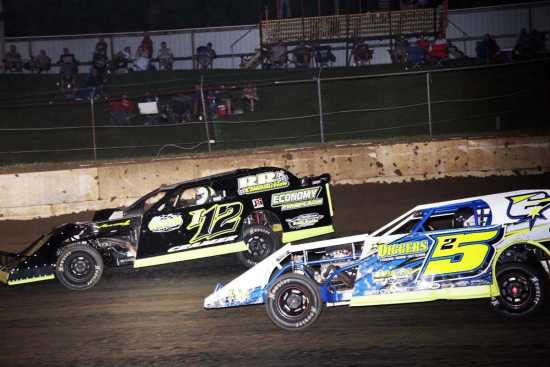 Jesse Cramer (No. 112) and Tyler Nicely (No. 25) battled side-by-side for much of the final 15 laps before Cramer earned the win. (Banner Graphic/CAREY FOX)

Just two cautions flew over the opening 50 laps as Cramer got past Nicely to hold down the top spot for the majority of the circuits with Levi Kissinger, Jake Humphrey, Robinson and Will Krup running up front.

At the 50-lap mark, drivers headed to the pits to allow their crews to make any necessary changes to the cars to set up the final 50 circuits.

When the field took the green flag, Humphrey made it apparent that he was going to be a major challenger for the win, jumping to second on lap 55. Nicely and Humphrey spent the next 25 laps door-to-door in a thrilling battle behind Cramer. Humphrey chose the top line and remained their as Cramer stayed on the bottom.

With Cramer out front, Nicely was challenging for second on the bottom of Humphrey with Robinson and Kissinger door-to-door ahead of Menser, who had risen from 18th.

With 15 laps left on the docket, Nicely made his move, slipping by Humphrey on the bottom amidst lapped cars on the track. Menser moved into a challenge with Humphrey as Robinson slipped into fifth ahead of Kissinger and Kenny Carmichael Sr.

As the remaining laps ticked off, each drivers' chosen line came into play as the leaders fought through lapped cars down to the finish.

Cramer and Nicely were wheel-to-wheel over the final laps with Menser in the mix as well. A blanket could have covered Cramer, Nicely and Menser over the final five laps before Cramer crossed the line several feet ahead of Menser as Nicely, Kissinger and Humphrey rounded out the top-five. Robinson, Carmichael, Krup, Deckard and Derek Groomer were the second-five finishers.

Short made sure there were no such theatrics at the finish of the sprint car A-main, he worked his way past the No. 20n and No. 20g of Coons and Schuerenberg on lap 16 and then checked out on the rest of the field.

Jon Stanbrough put on a show, ripping around the Putnamville oval from his 16th starting spot to place seventh as Chad Boesfplug took fourth ahead of Chase Stockon and Chris Windom.

Cain proved dominant in the UMP Super Stock feature, starting outside of row one and putting distance between himself and the field over the second half of the main event.

Peeden did a nice job holding off Wilson for the runner-up spot with Greencastle's Josh Boller in fourth ahead of Scott Carrington, who moved from 11th to fifth. Doug McCullough was sixth ahead of David Bumgardner, Carmichael Sr., Steve Sutliff and Travis Heramb.

In the first bomber feature of the evening, Almanza was in the lead by lap five as Christian Kline, A.J. Smith and C.J. Bryan were battling for the second spot. However, Bryan took over the second spot and moved into a challenge for the lead during the final five laps. Coming to the flagstand for the final lap, Bryan edged under Almanza for the lead and was able to hold off the Roachdale native for his sixth win of the season.

Smith was third ahead of Josh Settles, who advanced from 14th, and Cody Wright, who started 12th.

In the final bomber feature, Neal and Walters fought for the top spot over the final seven laps before Neal crossed the line first. However, he did not pass the technical inspection, which awarded the win to Walters, who scored his second A-main win of the year. Ron Smith claimed the second spot ahead of Bob Farris, Justin Clodfelter and Megan Caveness.

This weekend will feature the 'King of Non-Wing' for sprint cars as well as modifieds, super stocks and bombers.