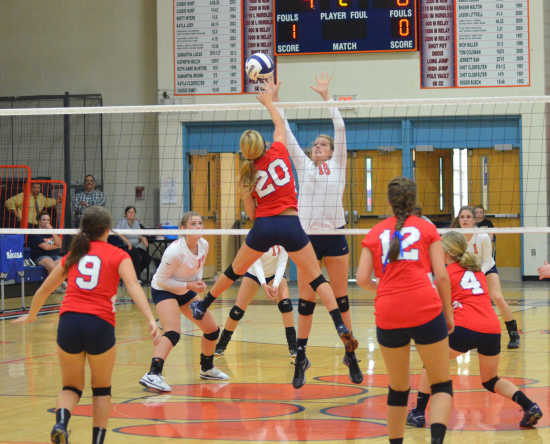 ROACHDALE--In the WCC opener for both schools, North Putnam made for less than accommodating hosts to South Putnam Thursday night.

The Cougars blasted through the opening two sets and only complacency allowed the Eagles to challenge the third set as the home side swept the match in three sets 25-13, 25-7 and 25-23.

"I was really proud of the girls," Dickson said. "We did an excellent job of receiving their serve and we did an awesome job serving through Kaitlin Mindiola and Raegan Bowling.

"It helped us a lot to get serves in early. We allowed Greencastle to do that to us at Brown County and it's not something we want to be on the receiving end of."

South Putnam coach Kristin Hendrich was downbeat afterwards and said the squad's practice form did not carry over into the game.

"I was extremely disappointed," Hendrich said. "I didn't have any words for the girls tonight.

"I see a different team at practice than I've seen at the games. We need to find a way to transform what we see in practice into the games."

North Putnam did not need to utilize its size advantage across the front line in the opening two sets, as the Cougar service game did more than enough damage on its own.

The hosts planted six aces in the opening set to help turn around an early 5-4 deficit into a 12-6 lead that was never under threat, growing to as large as 12 before the Cougars claimed the round 25-13.

Mindiola took center stage after the short break between sets, opening the second stanza with 14 straight service points and four aces to put the Eagles in massive hole.

The hosts never let up and had quickly taken the second set 25-7 and seemed to be in cruise control.

Dickson was pleased that Mindiola had a strong run after putting in the work at practice.

"Kaitlin had been struggling with her serve and she acknowledged that," Dickson noted. "She really looked good tonight after she had worked very hard on that part of her game."

South Putnam grabbed a brief 4-3 lead in the third set but even though they would not lead again, a lack of attack from the Cougars nearly cost them the set.

A 10-6 lead slowly slipped away to a 13-13 tie as the Eagles benefitted from some slack play by the hosts.

Though the visitors stayed within one or two points the rest of the set, South Putnam could not find a way to retake the lead and eventually Taylor Nauert placed a kill and an ace on back-to-back points to seal a three-set win.

Nauert finished with 13 kills and three aces while Lyndi Parent had 28 assists. Mindiola had four aces and six digs while Bowling had 17 digs and Shay Lucas added nine digs.

While the squad did take the final set, Dickson said that the Cougars began to drift out of the game late before rallying for the win.

"We talked before the game that when we make errors, we have to shake them off and move on," Dickson said. "We didn't have many errors in the first two games but that is something we need to work on as a team.

"We have to be able to play each point like it's a set point. Sometimes they start thinking too much and we just need to get up and play."

"The girls aren't missing serves in practice but get into game situations and miss lots of them," Hendrich said. "We get hits in and keep the ball in play but during the games we're making errors and handing points to the other team.

"I'm going to put pressure on our captains to help us transform what we see in practice into the games. Our leadership needs to rally the girls because there is a lot of potential here but it's hard to watch them play like they did tonight."

Each squad has one more match before the Putnam County Tournament next Saturday as South Putnam hosts Owen Valley Wednesday and North Putnam travels to Rockville Thursday.

Hendrich said the squad would have some extra work over the weekend to try and shore up some of the problems that the team had recently encountered.

"We're having a special practice on Saturday for our hitters," Hendrich noted. "We have a middle hitter that played at Franklin come in to work with our front line.

"Hopefully we'll get some work in with our positioning and our coverage and get a new perspective on what we're doing on the court."

Dickson, meanwhile, said the squad was eagerly anticipating their trip to Rockville after dropping a five-set thriller to the Rox last season.

"Rockville is always scrappy," Dickson said. "They beat us in five sets last year and that's something we want to correct next week.

"We have a good relationship with Rockville from the summer and a lot of them know each other. This is almost a non-county rivalry for us and because that game is sitting in the back of their minds, I know the girls will be ready to play."