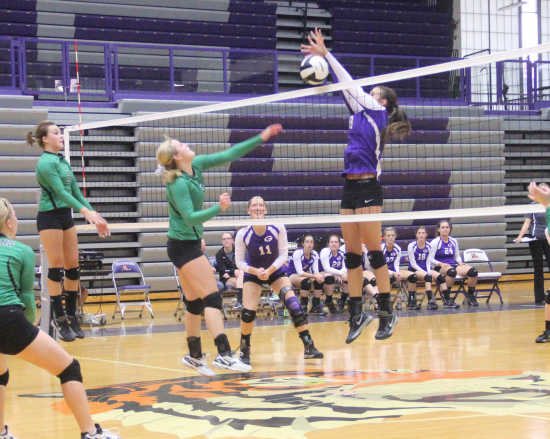 Greencastle's Quinci Miller with one of her 3 blocks. The Tiger Cub size proved useful in the home win.(Banner Graphic/JAY LOCKETT)

The score didn't tell the story when Cloverdale's volleyball team visited Greencastle on Thursday. The Tiger Cubs won the match in three straight sets, 18-25, 17-25 and 20-25 but the Clovers made their Putnam County rivals work for everything.

"We have to have a lot of energy," said Tiger Cub coach Maggie Walters. "Especially in county and conference games. When we come out strong that is huge for us. If we come out and they get a run on us, we just kind of shut down. We didn't do that tonight. We came out and we got runs on them from the very beginning."

There was no shutting down from the Cloverdale side as the front line kept attacking and putting Greencastle in tough positions. In each game Cloverdale took advantage of opportunities and put pressure on the home team.

"There is no quit in us," Clover coach Katherine Moore said. "We got off to a poor start. It's hard to play catch-up ball against a good team."

Greencastle was the bigger team with Quinci Miller and Taylor Stoltey's height as well as Olivia Divine playing larger than life while going up for spikes. However, Cloverdale's quickness kept the visitors in the games, as they were able to dig the ball out of tough situations.

"They have a little bit more size on us," Moore said. "I thought we played really well at times. My kids are fast and they dig the ball well. They're scrappy and I have a great team. I'm proud of them. I appreciate how hard they work."

On the Tiger Cub side, the players' communication is another way they can use their size advantage.

"We play together," senior setter Miller said. "There is no doubt that we are more than a team. We are a family out there. We have some benefits that other teams don't have. We have great passers and great hitters. We're blessed to have all-around good players in every position. I love my team."

Greencastle's next match is Wednesday at North Montgomery and then the Putnam County Tournament next Saturday at North Putnam.

Cloverdale's next match is Monday against Bloomfield.