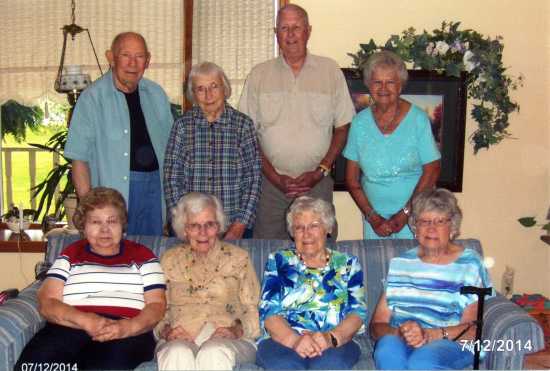 Wilma Wallace invited her classmates from the Fillmore High School class of 1949 to her home for lunch on July 12. Eight members, two spouses and three daughters attended. Memories of yesteryear were passed around, as was so much fun. Classmates in attendance included (front from left) Madonna (Goss) Woodall, Anita (Selsor) Henderson, Florence (Pell) Daringer, Vera Jean (Ross) Clark, (back) Don Thompson, Ethel (Thompson) Hammond, Kenneth Carpenter and Wilma Wallace. Twenty people graduated in the class of 1949, and 12 are left. Those not at the reunion were Patricia (Henderson) Pell and Kathleen (Kendall) Smith, who couldn't come, as well as Judith (Pruitt) Osment, who lives in Alaska. No one could reach Thomas O'Neal, and anyone who knows his whereabouts is asked to contact a class member.