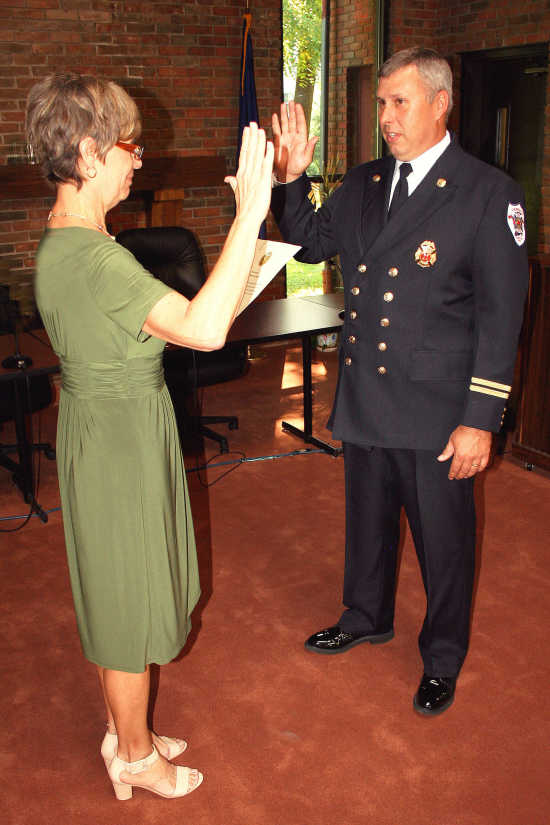 Vacancy in the shift captain ranks for the Greencastle Fire Department?

There's an App for that. Kyle App.

App, a veteran of more than 13 years with the city fire department, was sworn in Friday as captain of the third shift for GFD.

He joins John Shafer and Brian Poole as the department's three shift captains. App's promotion leaves a vacancy in the lieutenant ranks alongside Lts. Kenneth Shepherd and Rob Frank.

"We believe he will do a wonderful job leading his shift and will be a great asset to the administrative team at the fire department," Newgent added.

App, being promoted after five years as a lieutenant, will lead a shift platoon that includes veteran firefighter Paul Hinton and some of the department's newest additions, Brock Beebe, Jason Simionson and Elizabeth Adams.

"Mentoring is so important," Chief Newgent said of App's role of working with the younger staff.

"I enjoy the camaraderie," App said, noting he's been involved in shepherding the GFD reserve program the past few years. "I'm going to enjoy teaching the new group on my shift."

His passion, App said, is "getting out there and helping people who need help."

Describing himself as "teamwork-oriented," App said he works "with a good bunch of people."

The veteran firefighter said he enjoys the investigative side of the profession and "wouldn't mind picking that back up again" in his new role.

App, who logged four years as a Bainbridge volunteer firefighter before joining GFD, resides in Montezuma with wife Amy and three children, Britany, 13, Tyler, 10, and Isabella, 7.

The GFD consists of 18 paid staff, including Chief Newgent, along with six part-time personnel and 10 reserves.

As vacancies currently exist within the reserve ranks, a recruitment effort will be announced in the near future, Newgent and App noted.